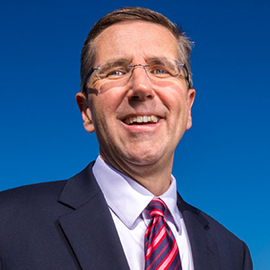 WATERLOO – John Milloy — former Ontario cabinet minister, member of provincial parliament for Kitchener Centre and senior adviser to former prime minister Jean Chrétien — has accepted a position as assistant professor of public ethics and co-director of the Centre for Public Ethics at Waterloo Lutheran Seminary, and a position as the inaugural practitioner-in-residence in applied political science at Wilfrid Laurier University.

Milloy will bring a practical political perspective to his roles at the Seminary and Laurier, gained from more than a decade in the Ontario government. Milloy served as the MPP for Kitchener Centre from 2003 to 2014, and held various cabinet positions during his tenure including government house leader; minister of training, colleges and universities; minister of community and social services; and minister of research and innovation.

In his two-year appointment at the Seminary — a federated college of Wilfrid Laurier University — Milloy will teach various courses to undergraduate and graduate students, and serve as co-director of the Seminary’s Centre for Public Ethics alongside David Pfrimmer, principal-dean of the Seminary.

Pfrimmer, who says many Canadians have become disillusioned with the practice of politics, seeks to renew the art of politics and the common good through his work with Milloy at the Seminary.

“We are committed to a public ethic that renews our political imagination and challenges another generation to see public service as a way to realize the dream of what Canada can be,” said Pfrimmer. “John Milloy’s vast political experience, his recognized integrity, and his belief that our highest values and deepest convictions can play a role in public life, are qualities that make him a welcome addition to the Seminary’s and the Political Science department’s project to renew the way politics can be done.”

“With John Milloy serving as practitioner-in-residence, we will be able to broaden students’ scope by giving them access to the experience he has gained through a long and distinguished political career,” said VanNijnatten. “Having access to a politician like John, who is well respected among his peers, will allow students to learn first-hand what will greet them when they leave university, both at the community and at the provincial or federal political level."

In his work at the Seminary, Milloy said he can be an ambassador from the political class to faith communities and, as a practising Roman Catholic, he can highlight the importance of bringing faith communities to the table when governments try to solve complex challenges in society such as poverty, climate change and caring for an aging population.

“I am also looking forward to being the first practitioner-in-residence in Laurier’s Political Science program,” Milloy added. “I hope to bring a behind-the-scenes perspective on the realities of politics and public life to better prepare students for a career in public service.”

Before running for elected office, Milloy worked as the director of public affairs for the Centre for International Governance Innovation, as an assistant to former prime minister Jean Chrétien, and assistant to former cabinet ministers Stéphane Dion and John Manley.

Milloy’s two-year appointment at the Seminary begins May 1, and his one-year appointment at Laurier begins July 1. An invitation-only welcome reception will take place April 8 from noon to 2 p.m. at the Keffer Chapel at Waterloo Lutheran Seminary. Media are welcome to attend.