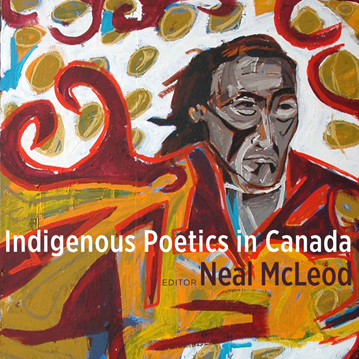 WATERLOO – WLU Press author Neal McLeod has won the 2014 Gabrielle Roy Prize (English section) for his edited collection, Indigenous Poetics in Canada. In addition, Larissa Lai, also a WLU Press author, was one of four finalists for the prize with her book, Slanting I, Imagining We: Asian Canadian Literary Production in the 1980s and 1990s.

The Association of Canadian and Quebec Literature awarded the prize at a reception May 30 in Ottawa.

“We’re very pleased by this well-deserved recognition accorded to our authors,” said Brian Henderson, director of WLU Press. “The Press has a strong tradition as one of Canada’s leading scholarly publishers, especially in the field of Canadian literature, and this recognition speaks to the continuation of that pivotal role.”

In Indigenous Poetics in Canada, McLeod brings together 28 original texts – including essays, scholarship, interviews and stories – that explore and articulate the dynamics of Indigenous poetry and poetics.

“This collection demonstrates that poetic inquiry becomes a means of exploring and understanding an expansive range of narrative practices as rigorous modes of cultural production,” noted the prize jury.

Lai’s Slanting I, Imagining We: Asian Canadian Literary Production in the 1980s and 1990s contextualizes and reanimates the urgency of that period, illustrates its historical specificities, and shows how the concerns of that moment continue to resonate for contemporary discussions of race and literature in Canada. The book is a “long overdue discussion of Asian Canadian literary production,” noted the jury.

Founded in 1974, Wilfrid Laurier University Press has a reputation for excellence in scholarly publishing in the areas of history, literature, sociology, social work, life writing, film and media studies, Aboriginal studies, women’s studies, philosophy, and religious studies. In the spring of 2015, WLU Press was integrated into the organizational structure of the Wilfrid Laurier University Library.

“I’m thrilled for WLU Press, Neal and Larissa,” said Gohar Ashoughian, Laurier’s university librarian. “Our vision at the Library is for an environment that connects research, learning and cultural engagement, and these awards underscore the importance of the Press’s work across all three of these areas.”

Press publications have won numerous awards, and have now been recognized by the Gabrielle Roy Prize nine times. For more information on WLU Press and a full listing of its awards, visit www.wlupress.wlu.ca.

The Association of Canadian and Quebec Literature annually awards two juried prizes, one in English and one in French, for the best book-length studies in Canadian and Quebec literary criticism. Established in honour of late Quebec author Gabrielle Roy, this competition is open to works of criticism on Canadian or Québec literatures published anywhere in the world in English and French.