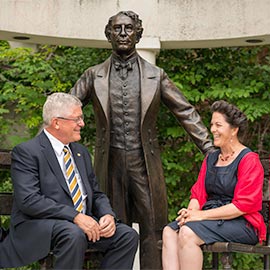 WATERLOO – Wilfrid Laurier University and the community organizers of the Prime Ministers Statues Project are teaming up to provide a permanent home on the university’s Waterloo campus for a series of life-size monuments commemorating Canada’s past prime ministers and the history and issues with which they are associated.

The project will help the community mark the sesquicentennial (150th anniversary) of Confederation in 2017, while at the same time providing area students, residents and visitors with ongoing stimulus for education, discussion and awareness of Canada’s history and political leadership.

“We are delighted to be part of a community project that unites Canadian art and history in such a creative and thought-provoking way,” said Max Blouw, president and vice-chancellor of Wilfrid Laurier University. “There is no better place to locate these statues than a university campus, which is dedicated to learning, scholarship and the invigorating exchange of ideas and perspectives. I look forward to the discussions and educational programming that these statues will encourage at Laurier and in the broader community.”

The PM Statues Project is the work of a citizens’ group led by co-chairs Jim Rodger and Dave Caputo. The intent is to mark Canada’s upcoming sesquicentennial and to celebrate leadership, history and community through a series of bronze sculptures that portray Canada's past prime ministers. Each statue will include educational components and will be designed to encourage the public to linger and interact with the art.

“We are excited to have a permanent and publicly-accessible home on the university’s campus,” said Rodger. “Partnering with Laurier to develop more interest in Canadian history and growing the region’s tourism at this high-traffic location truly matches our aims.”

The first statue in the series — a life-size rendering of Sir John A. Macdonald by artist Ruth Abernethy of Wellesley — was unveiled this past January. The statue has been showcased at the Kitchener Memorial Auditorium and at TheMuseum in Kitchener. It was moved to a temporary location in the Quad on Laurier’s Waterloo campus this week and will remain there until a permanent location on the campus is determined.

The citizens’ group behind the PM Statues Project is responsible for financing the creation of the statues and is actively seeking support through a fundraising campaign. The university will provide the location, installation and maintenance of the statues. Laurier will also develop and encourage educational material that assists in understanding Canada’s former prime ministers as individuals who reflected their times and were leaders in shaping Canada's response to the needs of the country and to world issues. As the open-sourced curriculum support is created, it will be hosted by e-learning provider D2L and made available nationwide.

Canada has 22 past prime ministers. The organizers of the PM Statues Project are working toward having many, if not all, of the 22 statues completed prior to Canada’s sesquicentennial on July 1, 2017. The university will establish a curatorial advisory board to help determine, among other things, the best locations on the Waterloo campus for installing each statue.