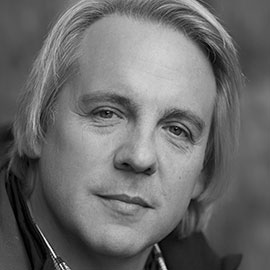 WATERLOO – Fiction writer and playwright Drew Hayden Taylor has been chosen as Wilfrid Laurier University’s incoming Edna Staebler Laurier Writer in Residence (WIR). Taylor is the award-winning author of 27 books, including adult and young-adult (YA) fiction as well as plays and essays. Taylor will be the fourth writer to hold the WIR position, fulfilling his term at Laurier from January to April 2016.

Taylor has also worked as the writer and director for documentary films and has written for television, principally for APTN’s Mixed Blessings. He has been twice nominated for a Governor General’s Award (once for fiction and once for drama), and has won a Chalmers Award for Toronto at Dreamer’s Rock in 1992, a Dora Mavor Moore Award for Only Drunks and Children Tell the Truth in 1996, an Independent Publisher Book Award for his YA fiction The Night Wanderer in 2008, as well as the Ontario Premier’s Award for Creative Arts and Design in 2010 and the Queen Elizabeth Diamond Jubilee Award in 2012.

Taylor was chosen from a group of 20 applicants for the residency.

“We have been very happy with the ways our past Writers in Residence have fostered discussion between different parts of the university, and made links between Laurier and artistic communities in Waterloo, Kitchener and Brantford,” said Tanis MacDonald, associate professor in the Department of English and Film Studies and chair of the Staebler WIR selection committee. “With Drew Hayden Taylor as our Staebler WIR, we anticipate an enlivening of the ongoing conversations about First Nations cultures at Laurier, as well as considerable interest in his work with YA literature and documentary film. Since Laurier is on the traditional territories of the Neutral, Anishnaabe, and Haudenosaunee peoples, Taylor’s years of work in speaking about how First Nations and non-First Nations people negotiate humour will bring a most timely and welcome discussion to this university.”

Each year, the Edna Staebler Laurier Writer in Residence acts as a resource to the Laurier community while pursuing individual writing projects. During his term at Laurier, Taylor will give public lectures, provide one-on-one feedback to student writers and writers in the community, and conduct writing workshops while working on his third novel, Chasing Painted Horses.

The Edna Staebler Laurier Writer in Residence position was established in 2012 by a bequest from the late Edna Staebler, prolific creative non-fiction writer and author of the very popular “Schmecks” series of books that celebrate the culture of Waterloo Region. Previous Staebler Laurier WIRs include poet Sonnet L’Abbé (2015), playwright and filmmaker Colleen Murphy (2014) and creative non-fiction writer Andrew Westoll (2013).

A separate bequest from Staebler sponsors the Edna Staebler Award for Creative Non-Fiction, awarded each year to a writer’s first or second book of creative non-fiction, and the most lucrative literary prize administered by a Canadian university.