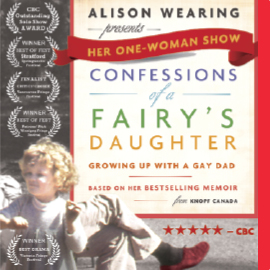 WATERLOO – Wilfrid Laurier University presents Alison Wearing’s one-woman show, Confessions of a Fairy’s Daughter, based on her bestselling memoir of the same name about growing up with a gay father in the 1980s. Wearing will perform her award-winning show Feb. 12 at 8 p.m. in the Maureen Forrester Recital Hall on Laurier’s Waterloo campus.

Woven through music and imagery, the 70-minute monologue moves from Wearing’s carefree childhood to the moment she learned, at age 12, that her family was a “tad more complex than she thought.”

The show has played to sold-out houses across Canada and off-Broadway, earning five-star reviews and top awards.

Wearing’s memoir, Confessions of a Fairy’s Daughter, was shortlisted for Wilfrid Laurier University’s Edna Staebler Award for creative non-fiction in 2014, was one of 12 books long-listed for the 2014 RBC/Taylor Prize for Non-Fiction and listed as a Chapters/Indigo Recommended Reads and Top 50 of 2013.

Wearing’s writing has been recognized with a National Magazine Award gold medal, a Western Canada Magazine Award first prize, and was a finalist for the Journey Prize. Her first book was a travel memoir, Honeymoon in Purdah: an Iranian Journey. Over the past decade, she has devoted her singing, dancing, acting and writing talents to the performing arts, delivering more than 100 performances in over 40 cities in Canada, the United States and Mexico.

Wearing is based in Stratford, Ontario. She graduated from Laurier in 1989.

The Confessions of a Fairy’s Daughter performance at Laurier is sponsored and organized by Laurier’s Faculty of Arts and Diversity and Equity Office. It is free of charge and open to the public. To register, visit www.eventbrite.ca.