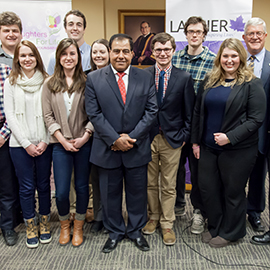 WATERLOO – Wilfrid Laurier University students voted in favour of a student levy that will enable up to 10 students per year from international conflict zones to pursue degrees at Laurier through the International Students Overcoming War Scholarship Fund (ISOW).

The levy, which represents up to $4 per Laurier student per term, will allow Daughters for Life Laurier to broaden its vision and develop partnerships with other organizations to sponsor those from conflict zones throughout the world.

Annie Serez, Daughters for Life Laurier co-president and third-year Global Studies student, says that after working for two years on this initiative, the support from Laurier students will allow them to move forward.

“I’d like to thank our executive team and the general student population,” she said. “The fact that students were willing to donate has secured everything. The Laurier community will be able to see the results of their donations and meet the students. We will all be enriched by this experience.”

The university will now begin the process of identifying suitable partner organizations to bring additional students to Laurier.

“Just as students have been integral to getting the initiative to this point, they will remain full partners in subsequent stages,” said Gavin Brockett, associate professor and co-coordinator of Laurier’s Muslim Studies option, whose first-year arts seminar class project and presentation by Abuelaish led to the student initiative.

The Daughters for Life Foundation is in the process of selecting the two women from the Middle East who will begin studies at Laurier in the fall. Prospective students will have to meet Laurier’s admissions requirements. The foundation will work closely with both the university administration and Daughters for Life Laurier to identify the candidates best suited to the programs offered at Laurier. Serez encourages students who would like to be part of this initiative to join the student club and to contribute to its activities in the year to come.

Abuelaish established the Daughters for Life Foundation in memory of three of his daughters, Bessan, 21; Mayar, 15; and Aya, 13 who were killed by an Israeli tank shell during an attack in the Gaza strip in 2009. The foundation is built on the belief that educating young women will build the road to peace in the Middle East. The foundation offers awards and scholarships to young women of any Middle Eastern nationality, background or religion to study in Canada, the US and the United Kingdom.