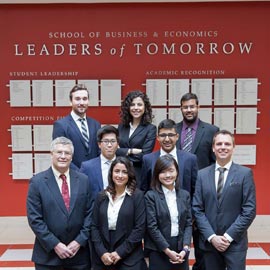 WATERLOO – A team of Wilfrid Laurier University economics students at the Lazaridis School of Business and Economics will compete in the finalist round of The Governor’s Challenge national competition. The competition, which challenges teams to simulate the role of monetary policy advisor to the Bank of Canada’s Governing Council, takes place at the Bank of Canada’s head office in Ottawa on Feb. 13, 2016.

Students analyze and forecast economic developments to recommend whether to raise the bank’s key interest rate, lower it, or leave it unchanged – in order to keep inflation low and stable and in line with the two per cent inflation target. The teams then present their work and recommendation to a panel of Bank of Canada judges, who evaluate the teams on the substance of their analysis, the quality of their presentation and evidence of strong teamwork.

“It’s an honour to represent the Lazaridis School in the first ever Governor’s Challenge,” said fourth-year student Farah Omran on behalf of her team. “There was a steep learning curve, but it has been an incredibly positive experience.”

The competition began Nov. 27 with the first round of presentations judged over video conference. Over 100 undergraduates from 22 universities across Canada participated.

The Governor’s Challenge enabled the students to build on concepts learned through their economics courses, marrying theory with a real-world problem.

“The Bank of Canada challenge provides our economics students with a unique experiential learning opportunity, challenging them to confront and analyze data beyond what they see in the classroom,” said Johnson. “We’re very proud of the success and the incredible work ethic displayed by our student team. We’re confident they will do well in the finalist round.”

The winning team will be crowned The Governor’s Challenge National Champions and will be presented a trophy by Governor Stephen S. Poloz at a special award ceremony.