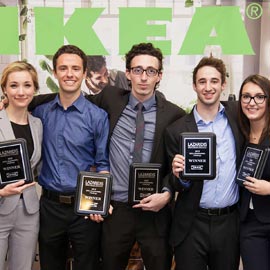 WATERLOO – An idea to recycle old IKEA furniture using 3D printers has won the IKEA Sustainability Challenge – a three-week competition held at Wilfrid Laurier University for second-year students at the Lazaridis School of Business and Economics. The challenge is sponsored by IKEA Canada to find groundbreaking ideas to integrate sustainability within the IKEA brand.

The winning team hopes their idea will address the environmental issue of furniture waste. Their idea recommends a system where customers would return IKEA furniture that they no longer use to an IKEA location. IKEA would break down the furniture into a filament for 3D printers. The printers would then create new furniture, parts and products using the filament from recycled goods.

“We are thrilled with the energy and enthusiasm that was on display in the IKEA Sustainability Challenge,” said Brendan Seale, sustainability manager at IKEA Canada. “It was no easy task to choose a winning team with so many strong ideas and presentations. Congratulations and thank you to all who participated, and of course to our partners at Wilfrid Laurier University for making the competition such a success.”

The winning team, made up of Olga Dementev, Olivia Gernon, Arthur Kanishov, Krystof Ponce and Jordan Richman, competed against 39 teams during the challenge. A total of five teams presented at the finals on Nov. 27 to a panel of judges, including representatives from IKEA Canada.

“This competition has been such an amazing learning experience and pushed us to achieve things we never imagined we could,” said Dementev, member of the winning team. “The time constraint played a huge role in our group’s ability to overcome adversity. As much as we believed in our team and the idea, winning still feels surreal. We are so excited to work closely with Brendan Seale and present our idea to IKEA executives.”

The winning team will have the opportunity to work with IKEA on their proposal and discuss their sustainability idea with senior executives at IKEA Canada. They will also be flown to an IKEA-owned windmill farm in Alberta for a tour and to learn about IKEA sustainability initiatives. Each team member will also have an opportunity to interview for a co-op or internship position at IKEA Canada.