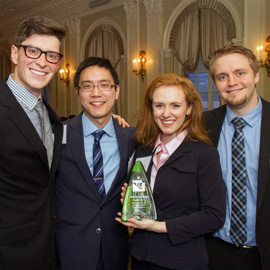 WATERLOO – A team of Wilfrid Laurier University MBA students won top place in the prestigious Aspen Institute’s Business and Society International MBA Case Competition April 17 in New York City. This is the third win for a Laurier MBA team, with previous wins in 2014 and 2011.

During the competition, students presented their ideas and solutions to a challenging, global insurance company case study produced by the Yale School of Management. The Laurier team – which was one of only two Canadian universities in the competition – competed against 24 teams from around the world, including Mendoza College of Business at Notre Dame and Kellogg School of Management at Northwestern University.

“In the past five years, our Laurier MBA teams have taken first place three times, along with two honourable mentions – a remarkable achievement,” said Colbert. “To me this is clear evidence that at Laurier we don’t see business as separate from society and environment, but rather as an integral player in contributing to a healthy, prosperous and equitable world – and that we have excellent students.”

Founded in 2009, the Aspen Institute’s Business and Society International MBA Case Competition aims to communicate that social, environmental and ethical issues are central to business growth. The competition involves three rounds. The top five finalist teams presented April 16 in New York City to a panel of esteemed judges and executives from the case company. The awards were announced on April 17 at the Yale Club in New York.

Laurier’s annual participation in the competition is sponsored and supported by the P&G Centre for Business and Sustainability in the School of Business and Economics. The Laurier MBA team won a grand prize of $15,000.