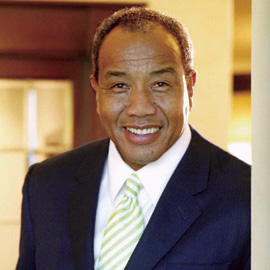 WATERLOO – Wilfrid Laurier University is pleased to announce the appointment of Michael Lee-Chin to a second four-year term as chancellor of the university, effective Oct. 28, 2015.

A renowned investor, businessman and philanthropist, Lee-Chin has served as chancellor since 2011 and is the eighth person to occupy the role since the university became a public institution in 1973.

“I am delighted that Michael has agreed to remain with us for another term,” said Laurier President and Vice-Chancellor Max Blouw. “As chancellor, he has generously shared his valuable insights and perspective with the university’s senior leaders. He has also been a wonderful ambassador for Laurier, helping us raise the profile of the university among influential audiences. And his warm and engaging presence at convocation has enhanced the meaningfulness of this important ceremony for our graduates and honorary degree recipients.”

Lee-Chin said he was pleased to continue his association with Laurier.

“I would like to thank the university for its kind expression of confidence,” he said. “I feel so honored to have been appointed for a second term.”

Born in Port Antonio, Jamaica, Lee-Chin came to Canada to study civil engineering at McMaster University on a scholarship. After graduation, he became a financial adviser and, at the age of 32, borrowed money to purchase stock in an investment firm. He has since become one of Canada’s most successful entrepreneurs and generous philanthropists. Today, Lee-Chin is chairman of Portland Holdings Inc., a privately held investment company that manages public and private equity and has a direct ownership interest in a collection of diversified businesses operating in sectors that include telecommunications, financial services media, tourism, health care and waste management. Portland is committed to “Building Strong Indigenous Businesses.” Equally important, these businesses must also seek to improve the social well-being of the communities in which they operate. Lee-Chin formally established the Portland mantra: prosperitas cum caritate, a Latin phrase that speaks to his belief that businesses must “not only do well, but also do good.”

Lee-Chin has won numerous awards and honours for his business and philanthropic achievements, including the Order of Jamaica, Canadian Entrepreneur of the Year (services category), and a Lifetime Achievement Award from the Canadian Youth Business Foundation. He holds several honorary degrees, including honorary doctor of laws degrees from Wilfrid Laurier University, York University, Northern Caribbean University, the University of the West Indies, McMaster University, and the University of Toronto. He also sits on the board of The Trust for the Americas, a foundation affiliated with the Organization of American States (OAS).