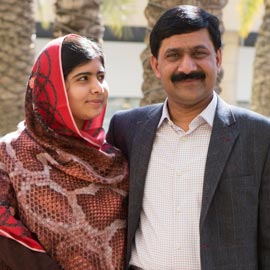 WATERLOO – Ziauddin Yousafzai, the father of an internationally celebrated Pakastani education activist, and Linda Schuyler, co-creator of the Degrassi television series, are among those who will receive honorary degrees at Wilfrid Laurier University’s spring convocation in June.

Isabel Bayrakdarian is a distinguished and versatile soprano opera singer celebrated for her beauty, presence and multi-hued voice, as well as her non-musical degree in biomedical engineering. Bayrakdarian has sung in leading international opera houses and performed with orchestras led by world-renowned conductors. Bayrakdarian has an eclectic background, refusing to be cast into a particular style or period. She has performed in a wide variety of contemporary operas, recorded a diverse selection of music from tango to trance and participated in several film projects, most notably the Gemini-nominated film Long Journey Home in which she is the subject. She has received four consecutive Juno Awards for Best Classical Album (Vocal), the Queen Elizabeth II Golden Jubilee and Diamond Jubilee medals, the George London Foundation Award, and the Canada Council Virginia Parker Prize. She will receive an Honorary Doctor of Letters Degree Monday, June 8 at the Athletic Complex on Laurier’s Waterloo campus starting at 2 p.m.

Natalie Zemon Davis is Canada’s foremost scholar of early modern history, pioneering interdisciplinary courses in history and anthropology, history and film, history and literature, and the study of women and gender. Throughout her life, Davis’s writing brought attention to the lives of ordinary people through an interdisciplinary perspective. She studied archival documents to construct commentary about the political, social and cultural environment of early modern Europe. Davis, a University of Toronto professor, has held teaching positions at some of the most prestigious schools in the world, received the Holberg International Memorial Prize in 2010, was named Companion of the Order of Canada in 2012 and is the Henry Charles Lea Professor of History at Princeton University. She will receive an Honorary Doctor of Letters degree Wednesday, June 10 at the Athletic Complex on Laurier’s Waterloo campus starting at 2 p.m.

Ziauddin Yousafzai is an educator in Pakistan and widely known for being the father of education activist Malala Yousafzai – the co-recipient of the 2014 Nobel Peace Prize. Yousafzai, an advocate for girls’ education, resisted threats from the Taliban and inspired his daughter to promote the right to education for children. On Oct. 9, 2012 Malala was shot by Taliban fighters and, remarkably, survived. Malala and her father have continued their advocacy efforts to advance peace and the rights of girls to an education in spite of the threat of danger. Ziauddin serves as the United Nations Special Advisor on Global Education, the educational attaché to the Pakistani Consulate in Birmingham and is Patron-in-Chief of Global Peace Council Pakistan. He will receive an Honorary Doctor of Laws degree Thursday, June 11 at the Athletic Complex on Laurier’s Waterloo campus starting at 9:30 a.m.

Aziz Bhaloo is an entrepreneur and philanthropist devoted to the service of others. He was born in Tanzania in 1944 and raised in Kenya. After immigrating to Canada in 1974, Bhaloo and his wife Amina founded the first Centre for Early Learning child-care centre focused on serving high-needs communities in Toronto. Bhaloo’s centre operates with 300 employees serving more than 18,000 children within the Greater Toronto Area. Bhaloo is devoted to helping people of all backgrounds to achieve their full potential and has served on many influential boards and foundations to advance his mission. Bhaloo is committed to the service of others in Canada and abroad, promoting the physical, social and spiritual health and well-being of this and future generations. He will receive an Honorary Doctor of Letters degree Thursday, June 11 at the Athletic Complex on Laurier’s Waterloo campus starting at 2 p.m.

Martin Junge is the general secretary for the Lutheran World Federation and is regarded for his leadership in the Lutheran church and commitment to improving human rights in Latin America. As the president of the Evangelical Lutheran Church in Chile, Junge brought reformation and leadership to the organization and played a decisive role in passing the act granting equal legal status to religious organizations in Chile. He is devoted to rebuilding Chile into a democracy that upholds human rights and, as the general secretary, has brought international attention to the burden of illegitimate debt on many poor countries. He will receive an Honorary Doctor of Divinity degree Friday, June 12 at the Athletic Complex on Laurier’s Waterloo campus starting at 2 p.m.

Brian Maracle is an advocate for the preservation of the Kanyen’kehaka (Mohawk) language as well as an author, journalist and radio host. Maracle is known for contributing Aboriginal voices to the public discourse on Aboriginal issues. Maracle has written for The Globe and Mail, hosted the CBC Radio program Our Native Land, and is the author of several books about Aboriginal stories. Inspired to reclaim the language of his heritage, Maracle established a full-time adult immersion language school with his wife Audrey called Onkwawenna Kentyohkwa and began to host a radio program in Mohawk titled Tewatonhwehsen! He has twice been a finalist for the Gordon Montador Award in non-fiction writing, has won a National Radio Award for his radio work and received the Six Nations Community Treasure Award in 2008. He will receive an Honorary Doctor of Letters degree Tuesday, June 16 at the Sanderson Centre for the Performing Arts in Brantford starting at 2:30 p.m.

Linda Schuyler is the co-creator and executive producer of the iconic Canadian television series Degrassi. Schuyler began the series in 1976 as Kids of Degrassi Street, which spawned the Degrassi franchise that airs in over 150 countries. Schuyler is regarded for her commitment to representing adolescence in all aspects and exploring youth culture taboos with honesty, integrity and humility. She is a founding member of the Association for Media Literacy, and a volunteer with UNICEF, Free the Children, and Big Sisters. In 1993, Schuyler was made a member of the Order of Canada and in 2012 was made a member of the Order of Ontario. Degrassi received numerous awards, including two International Emmy Awards and 20 Gemini Awards, and is celebrating its 35th anniversary. She will receive an Honorary Doctor of Letters degree Wednesday, June 17 at the Sanderson Centre for the Performing Arts in Brantford starting at 10:30 a.m.