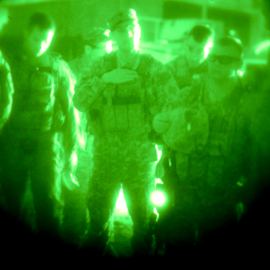 The artist behind Nightwalk is Larry Towell, a renowned Canadian photographer who has photographed war zones around the world. For Towell, producing the video-based Nightwalk is a departure from his usual work, which revolves around still photography.

“I have spent my life documenting many of the world's most violent conflicts, from Central America to the Middle East,” said Towell. “In order to challenge the dominant consensus of my culture and to work from a peace and human rights perspective, it is necessary for me to physically engage. My photographs are not planned nor composed in advance. I do not set them up in a studio, and I do not anticipate that the audience will necessarily share my opinion.”

In addition to his numerous international awards, Towell holds the distinction of being the first Canadian to be associated with Magnum, the world’s most prestigious photo agency. His photography has been published in magazines such as LIFE, The New York Times Magazine, Esquire, Elle, Rolling Stone, Geo and Stern, in addition to his several exhibitions in Canada, the U.S. and Europe.

Towell has produced projects on the Nicaraguan Contra war, on the relatives of the disappeared in Guatemala and on American Vietnam War veterans who had returned to Vietnam to rebuild the country. His published books include: El Salvador, which was baked on 10 years of reporting in the Central American country; No Man’s Land, based on the lives of Palestinians; and his most recent publication, Afghanistan, which he produced while working in the Middle Eastern nation between 2008 and 2011.

Nightwalk will run from Oct. 29 – Dec. 6 at the Robert Langen Art Gallery, located in the John Aird Centre on Laurier’s Waterloo campus.

The Robert Langen Art Gallery has played a vital role at Wilfrid Laurier University’s Waterloo campus since it opened in 1989. As Laurier’s visual arts centre, the Robert Langen Art Gallery provides knowledge, stewardship, appreciation and enjoyment of Canadian art and culture to members of the Laurier community and beyond. The gallery’s annual programming complements concepts and theories in Laurier’s academic curriculum and integrates community outreach initiatives as related to the visual arts.