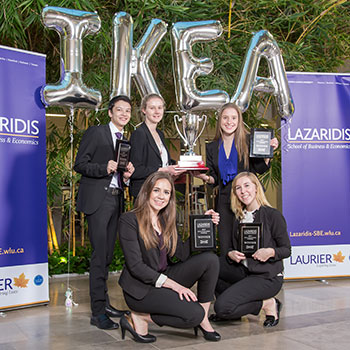 Second-year Bachelor of Business Administration (BBA) students in the Lazaridis School of Business and Economics were invited to participate in the three-week competition. Finalist teams pitched to IKEA executives and business sustainability experts to win scholarship money and an interview for a summer internship at IKEA.

“This competition showcases the deep and diverse social interests of our business students,” said Assistant Professor and Interim Executive Director of the Schlegel Centre for Entrepreneurship and Social Innovation Laura Allan, who coordinates the competition. “Each year IKEA poses an incredibly complex problem to our students and they deliver impressive solutions.”

After extensive debate and deliberation, IKEA executives and judges selected “Safe Home,” the team who presented that IKEA adopt and support an awareness and education campaign to reduce the stigma around domestic violence with future plans to build shelters for those affected. The team included Sophie Battaglia, Justin Eng, Shannon Lebarron, Erin Schilstra and Danielle Stregger.

"Domestic violence impacts the lives of millions of Canadians," the team said in a statement. "However, it is very difficult for victims to receive the support they need because of the stigma that surrounds domestic violence. By having IKEA Canada stand behind this cause, we saw an opportunity to make a positive impact in the lives of so many Canadians, and we could envision a real solution."

Team #IKEASafeHome reported that up to 25 per cent of IKEA’s employees and customers are affected by domestic violence and that no other major company in Canada supports this cause. The team suggested IKEA design an all-purple showroom during Domestic Violence Awareness month in October and change its iconic blue bags to purple during the month, to represent the colour of awareness against domestic violence during domestic violence month.

The group also suggested IKEA provide education and awareness training to its employees and also offer workshops and information sessions to high schools and postsecondary institutions across Canada to help to break the cycle of domestic violence through education. Lastly, the team suggested IKEA support victims through financial resources such as working with local women’s shelters or, ultimately, creating their own shelter with IKEA’s iconic beds, its own food, and support. #openthedoors

Initiated from an idea by Lazaridis BBA alumnus Mike Ward, manager, retail region North America and Scandinavia, IKEA, and sponsored by IKEA, this year’s competition asked students to propose a program to help IKEA align with an environmental or social cause to deepen its connections with its customers and communities to help it ensure long-term sustainability. IKEA has committed to sponsoring this competition for another two years.