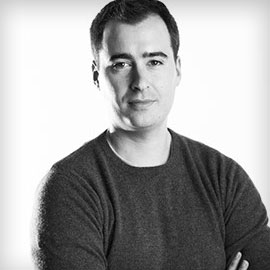 Based in Los Angeles, James McGough (‘04) provides financial and strategic advice and operating support to individuals and companies investing or operating in the media and entertainment industries. He is also currently CFO of No Trace Camping Productions, a Canadian-American production company that has produced and financed Goon, What If and most recently the Academy Award-nominated film Room. James has produced or provided financial consulting services for film/TV projects such as Before We Go, The Babysitter, Jane Got a Gun, Ready Jet Go, Midnight Sun, Room, The Duff, Dirty Grandpa, Fury and Goon 2. Alma Matters recently sat down with James to catch up.

Q: What have you been doing since graduation?
A: After graduating from Laurier, I moved to London, UK and worked in investment banking at HSBC Bank. Three years later, I moved to Los Angeles to start a career in the entertainment industry. My first job was at Summit Entertainment, a start-up film studio and distributor, where I ultimately became the head of the Corporate and Business Development team – overseeing all mergers and acquisitions, the greenlight process for films and financial planning. After selling Summit to Lionsgate, together with the former CFO of Summit I co-founded Latus Advisors, a consulting company which we continue to operate today.

Q: What was the most memorable part of your BBA experience?
A: I went on an exchange to Rennes, France during the last year of my BBA, which was an incredible experience. I made long-term friends with people from all over the world, met my wife and had the opportunity to travel around Europe.

Q: How has your BBA helped you in your career?
A: I came out of Laurier with very strong fundamentals in finance, math and statistics, which was key to launching my career in investment banking. Ultimately, this allowed me to realize my dream of working in the entertainment industry. Having been born and raised in Waterloo, the exchange program was terrific, allowing me to explore the world and realize there is nothing I can’t adapt to.

Q: What's next on the horizon?
A: Years of paying my dues and working hard are just starting to pay off. I feel like I’ve only scratched the surface of a career that still has huge opportunities for growth. Not only that, the entertainment industry is constantly changing, ensuring I have many years of interesting challenges ahead.