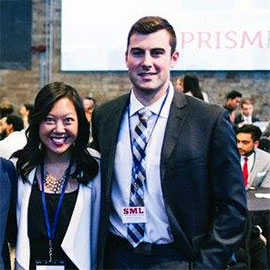 A trio of faculty and students from the Lazaridis School of Business & Economics have been awarded the 2016 Best Case by the Administrative Sciences Association of Canada (ASAC), Canada’s preeminent academic business association. The prized case, “Skating into the Future at the Kitchener Rangers Hockey Club”, was authored by Lazaridis School Professor Karin Schnarr and two fourth-year BBA students, Mathew Krizmanich and Chelsea Lee.

Since the pair were new to case writing, they approached professor Schnarr, who teaches business strategy and is the case lead for the Lazaridis School’s undergraduate Integrated Case Exercise (ICE Week), to assist in the process. “Dr. Schnarr provided the necessary groundwork and advice to make this case an overwhelming success,” Krizmanich acknowledged.

Both Krizmanich and Lee soon realized they had underestimated the amount of work involved in their tight timeframe. The six-week process involved meeting with the Kitchener Rangers’ top executives, researching and vetting company information, honing in on a specific focus and communicating with the Kitchener Rangers on an ongoing basis to ensure the case would provide innovative ideas they could use in their current and future strategy.

“Writing the case was nothing short of an incredible experience,” said Krizmanich. “As a graduating student, the case provided me with the unique opportunity to apply everything I had learned in the classroom, in previous leadership roles, and in the workplace into a living and breathing consulting assignment.”

The finished case was then used at the Inter-University Case Competition (IUCC) in January. Schnarr, who was one of the faculty judges at IUCC, was impressed by how well the competition was run: “It was better than what you’d see in the private sector.” Krizmanich and Lee were proud to see the culmination of all of their efforts come to life.

“As a fourth year business student, I have done my fair share of case analysis. However, the process of putting together a case from scratch required a whole new set of skills,” admitted Lee. “Knowing the amount of work that was put into the execution of this conference has allowed my four years at Laurier to end on an incredibly high note.”

“I am delighted that this work has been recognized by ASAC as the Best Case and I feel it is an example of the successful faculty-student collaborations that can happen,” said Schnarr. “Mat and Chelsea were wonderful ambassadors for the Lazaridis School and deserve this recognition for their efforts.”

The award will be presented at the annual meeting of the Case Track during 2016 ASAC Conference on June 4 to 6 in Edmonton.