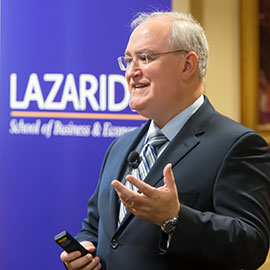 The Lazaridis School of Business & Economics hosted its most recent Economist-in-Residence, Craig Alexander, senior vice president and chief economist of the Conference Board of Canada, on Oct. 25. Alexander’s topic, Canada’s Great Challenge: Productivity, Innovation and Competitiveness, piqued the interest of a packed room of faculty, staff, students and community members alike.

“Productivity has a terrible connotation,” said Alexander, who cited that 80% of the rise in standard of living comes from productivity. He explained that economies grow when one of two things happen: there are more workers or the existing workforce is used more productively.

In recent years, Canadian economy hasn’t experienced growth at the same level – what was once a healthy 3% has remain hovered around 2% – and the market expectations have diminished significantly. Canada is trapped in sector stagnation and there is still the legacy of the economic crisis that we haven’t recovered from. If Canada wants strong economic growth, Alexander believes the country has to become more productive: “Every project should be put through a lens: ‘Will this enhance our productivity?’”

Globalization has created opportunities and new possibilities for growth, Alexander noted. However, it has also led to de-location and displacement. “You can’t roll back globalization and technical change – that boat has sailed. You can only adapt to it,” he advised. “Canadian businesses need to become more globally oriented for growth.”

He explained that there is a lot of regulatory red tape constraining business growth and that Canadian businesses are relatively risk-adverse – often going to the U.S. to find funding and test their product. That means as a country, Canada is investing in older technology than what’s currently out there. “In the Canadian economy, we see serial entrepreneurs…We do great in business startups” said Alexander. “Where we fail is growing businesses.”

Starting in the early 2000s, both Canada and the U.S. had their labour demand fundamentally change. There has been an increase in high-skilled jobs, a loss in low-skilled and even greater losses in mid-skilled jobs, resulting in rising income inequality. What does this mean? “We have workers without jobs and jobs without workers,” he stressed. “We need to up-skill.”

However, in comparison to Canada, Alexander shared that the U.S. pay mid-skilled workers less and high-skilled more. This creates greater competition for Canadian companies – in terms of higher overhead costs and a declining skilled talent pool. “You’re in a war for talent,” admitted Alexander. “Labour is very mobile, will move to where businesses are. We need to be able to compete.”

How can Canada become more competitive? Alexander suggests that the country should invest in the latest technologies and building a skilled workforce, commercialize more ideas, remove barriers that stifle business growth and improve access to capital for growing companies.

Alexander acknowledges that there are a variety of factors that will still constrain Canadian productivity and competitiveness – Canada’s small economy means less opportunities for economies of scale and its primarily resource focus receiving production from far off and more expensive locations – meaning that it will be a challenging road ahead for Canada. “Everything I’m saying is really easy to say and really hard to do.”