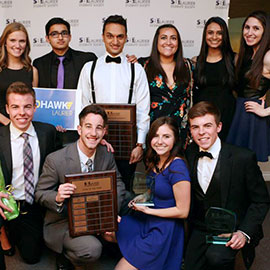 On Saturday, March 28, the School of Business and Economics’ Student Society (SBESS) and its clubs celebrated the end of a successful year at the second annual Year End Gala. Undergraduate students representing the 20 School of Business and Economics (SBE) clubs enjoyed a beautiful evening celebration at Conestoga Golf and Conference Centre, joined by faculty, staff and sponsors.

The pinnacle moment of the gala was the awards ceremony, where SBE clubs and associations’ members were recognized for their outstanding efforts and achievements throughout the year.

The Club of the Year award was presented to AdHawk Laurier, celebrating their widespread accomplishments over the year. As a new club for the 2014-2015 year, they had submitted a proposal at the beginning of the year that outlined everything they would accomplish in the upcoming 12 months. Not only did they hit every single one of these targets, but they also hosted six never-before-run events with huge success. This allowed them to establish a phenomenal reputation within the business school, despite having only existed for 10 months.

Laura Douglas, SBESS vice-president of clubs and associations applauded AdHawk on their efforts. “Looking back on the past year, the caliber of clubs and student leaders simply stands uncontested," she said. "However, this club has not just taken advertising to new heights, as their tagline suggests – they’ve taken SBE to new heights. AdHawk took on over 18 new clients that included SBESS clubs, SBE’s marketing department, and businesses from all industries within the Waterloo community. I could not be more proud of the co-presidents, Megan Burrow and Dan Gray, who passionately led their team in fulfilling their vision!”

This school year, the SBESS supported SBE clubs with the largest funding grant ever given in the history of the organization. The quality of events, programs and opportunities provided this year was unsurpassable. Twenty-five events were held that required the collaboration of more than two clubs, demonstrating the progression of collaboration that is imperative for fostering an even stronger sense of community. At the gala, the club presidents were commended for their unwavering commitment to providing true value to the SBE student body.

“Student engagement is at an all time high within Laurier SBE, which is a strong testament to the quality and passion of our student leaders,” said Evan Little, president of the SBESS. “These unprecedented successes have been instrumental in pushing our society forward both within the Laurier community and across Canada.”

The full list of award winners is as follows:

About the SBE Students’ Society

The SBESS serves as a central organization that keeps Laurier’s Business and Economics students of all years connected by providing programming, events, services and financial support.

The group is funded through the SBE Faculty Fee collected from SBE students. In addition, corporate partners across Canada help to provide additional funding towards programs, events and services. Working alongside the SBESS team are 20 Business and Economics clubs, which support student interests ranging from accounting to marketing, from leadership to online business, and everything in-between. A significant portion of the funds SBESS collects are granted annually to the 20 SBE clubs to assist them in operating and expanding their own mandates.

Students can learn more about the SBESS programs, services and events by visiting www.SBESS.ca or visiting the SBESS office in the Peters’ Building, room P1003.