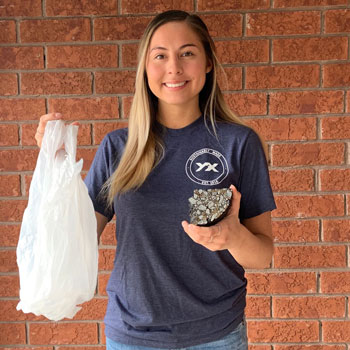 Wilfrid Laurier University’s Waterloo Enactus team will represent Canada at the Enactus World Cup for the second year in a row after competing against 61 teams from post-secondary institutions across Canada in three rounds of competition.

Laurier’s team, with representatives from Laurier Enactus ventures EarthSuds, Last20, Mighty Hawks and Smile Tabs, will compete against teams from 34 countries at the virtual World Cup competition, which will be held Oct. 14 to 21. More than 72,000 post-secondary students from around the world participated in regional and national competitions ahead of the global competition.

Laurier’s Waterloo Enactus team was named runner-up at the Enactus World Cup competition last year, behind the team representing Egypt. Laurier’s team also won the 1 Race 4 Oceans challenge, which recognizes students who are taking action to address issues facing the world’s oceans, including pollution, overfishing and climate change. This year there are three global races taking place. Laurier’s team is among the top 12 globally in all three races – 1 Race 4 Oceans, Race to Rethink Plastic and Race for Climate Action – with the finals to take place at this year’s World Cup in October.

“I am beyond proud of the team this year – to have kept the momentum going through such difficult circumstances and to come out on top again – I just can’t say enough,” says Laura Allan, assistant professor in the Lazaridis School of Business and Economics and faculty advisor for Laurier’s Waterloo Enactus team. “It just shows again what amazing students we have and how incredibly committed they are to be making a difference in the world.”

Laurier’s Waterloo Enactus team was selected to represent Canada by a panel of 50 judges, including many top Canadian CEOs, for their ability to enable social, environmental and economic progress through entrepreneurial action. This represents the third year in a row that the team has advanced to the overall national final round. The team also won several other challenges at the Enactus Canada National Exposition, which was held May 10 to 20.

EarthSuds and Last20 were named champions in the TD Entrepreneurship Challenge, a competition empowering post-secondary students to develop and deliver projects that teach entrepreneurial skills to aspiring and existing entrepreneurs. Mighty Hawks won the Unilever Recognizing Abilities Project Accelerator Best Project award, designed to empower students to identify, create and deliver projects that empower people with disabilities, enabling them to participate fully in society without barriers.

Solace, a new Laurier team, was named champion of The Co-operators Youth Mental Wellness Pitch Competition, for their pitch of an app that would support female students during and after incidences of partner abuse.

EarthSuds, created in 2017, produces single-use shampoo, conditioner and body wash tablets to eliminate the need for plastic toiletry bottles. The venture launched its e-commerce site in fall 2019 and its plastic-free toiletry products are now carried in more than 70 retail stores across North America, and will soon be carried in Sobeys and Loblaws.

Last20 seeks innovative and sustainable ways to upcycle plastic waste. The company is working with researchers to develop a way to replace some of the bitumen, used as a binding agent in pavement, with waste plastic bags. They will be conducting their first pilot this summer on a loading dock – the first of its kind in Ontario and the second ever pilot of plastic pavement in Canada.

Mighty Hawks provides free life skills and employment training year-round for adults with developmental disabilities. Participants are paired one on one with Laurier students, who help them master a range of skills including basic financial literacy, resume building, and active listening and communicating.

Smile Tabs is reimagining how toothpaste is packaged, with the aim of reducing the waste from millions of plastic toothpaste tubes that end up in landfills each year. They’ve designed biodegradable, single-use toothpaste capsules that have a similar user experience to regular toothpaste, without the waste.

The Enactus World Cup competition will be held virtually Oct. 14 to 21. The competition is free to watch and open to everyone.