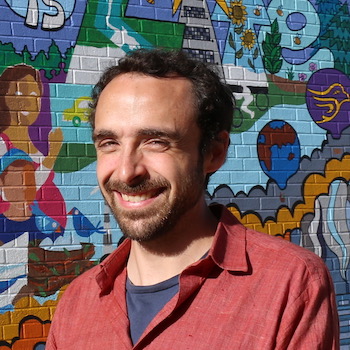 “My research explores the role of collective signposts, storytelling and arts-based visioning processes to catalyze social change,” says Reimer-Watts, noting that signposts are tangible, visible symbols of a cause or response to crisis. “We can see the power of signposts in response to COVID-19. There has been a huge amount of messaging and symbolism placed in public spaces that reinforce a collective response to the COVID-19 crisis. Now we need a similar society-wide response to address the climate emergency at a similar speed and scale of action.”

While pursuing his PhD at Laurier, Reimer-Watts has helped create powerful public signposts for climate action in partnership with the local community, including as student lead for the Climate is Life mural on Laurier’s Waterloo campus and by co-creating imagery and signage through public art builds for local climate strikes. He is also the director of numerous short films profiling the climate movement and social justice groups in and around Waterloo Region, and a feature documentary on climate change called Beyond Crisis. Laurier students, staff and faculty can watch the film online through the Laurier Library by using the search terms ‘Beyond Crisis film.’

“I realized that I needed to step up in a more meaningful way and that doing so would give me more optimism about my own future by engaging in the kind of change that I want to see in the world,” says Reimer-Watts. “Given that we are all part of this world and are already facing major consequences due to past inaction, I encourage everyone to consider ways that they can plug into constructive action for a far more sustainable future.”

Learn more about Reimer-Watts’ research in episode two of Research Chat, now available for download wherever you listen to podcasts. Research Chat, which showcases graduate students’ research and experiences at Laurier, is a collaboration between Laurier’s Office of Research Services, the Faculty of Graduate and Postdoctoral Studies and the Laurier Library. It is part of a growing suite of Laurier-produced podcasts.