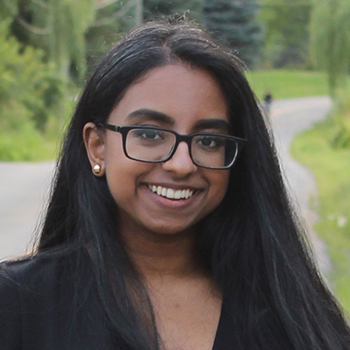 People living with Parkinson’s disease often experience gait impairment, a debilitating symptom that can make walking impossible and independence a challenge. To date, researchers are conflicted as to whether gait impairment is caused by sensory or cognitive deficit. Without clarity, it has been difficult to find effective treatments.

Sangarapillai was recently awarded a $15,000 scholarship from Parkinson Society Southwestern Ontario to fund her research. She was one of three graduate students selected across the province.

“It feels pretty amazing,” says Sangarapillai. “This is a very competitive scholarship that has applicants from all over Ontario, all of whom are focused on the same topic. So I’m pleasantly surprised that my study was recognized.”

Sangarapillai’s graduate research is being supervised by Quincy Almeida, director of Laurier’s Movement Disorders Research and Rehabilitation Centre (MDRC). The MDRC’s multidisciplinary team, which includes experts in biomechanics, occupational therapy and neurology, is dedicated to understanding how brain function contributes to movement impairment, particularly in people with Parkinson’s disease.

“Experimental studies contribute to the literature, but at the end of the day, if participants aren’t feeling any better then it doesn’t help them. We are doing our part for the Parkinson’s community in Waterloo Region.”

Research at the MDRC has proven that physical exercise is an essential component in halting disease progression in Parkinson’s patients, and it will be a core focus in Sangarapillai’s upcoming study.

“I will use rehabilitation therapy to treat the participants in our study,” says Sangarapillai. “I want to randomize individuals into two treatment groups. One will focus on aerobic exercise, which improves cognition, and one will focus on a sensory training protocol Professor Almeida developed called PD SAFEx, which has been shown to improve motor deficits and balance control.”

After completing the exercise programs, Sangarapillai will evaluate if participants’ gait has improved, plateaued or worsened.

“It’s possible that putting a patient with a cognitive problem through a sensory training program may still improve their gait,” says Sangarapillai. “There is so much overlap in the brain, so treating one may improve the other.

No matter the results, Sangarapillai is committed to including treatment in her research protocol so that the volunteer participants can benefit from the study.

“Experimental studies contribute to the literature, but at the end of the day, if participants aren’t feeling any better then it doesn’t help them,” says Sangarapillai. “We are doing our part for the Parkinson’s community in Waterloo Region.”