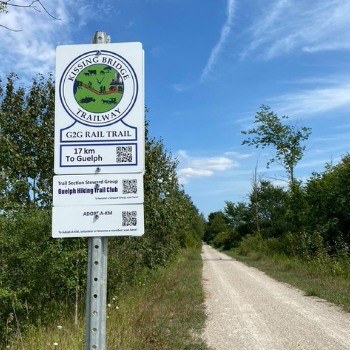 Restoration to an extensive nature trail has been completed thanks to a recent university-community collaboration.

The trail, which runs along a former Canadian Pacific Rail line between the two towns, is popular among nature and cycling enthusiasts but needed significant restoration. With partial funding from Ontario’s Ministry of Agriculture, Food and Rural Affairs and the Rural Economic Development program, the trail organization was able to begin restoration and create four full-time employment opportunities ideal for students in doing so.

“They educated themselves about the trail, were organized and managed each of their areas incredibly. They really stepped up and did everything we hoped they would do.”

“Each of the students demonstrated passion for the trail,” says Doug Cerson, executive director of the Goderich to Guelph Rail Trail Inc. “They educated themselves about the trail, were organized and managed each of their areas incredibly. They really stepped up and did everything we hoped they would do.”

Blanchard, Brady and Stanfel were on site each day and wore protective equipment to inventory the trail’s vegetation and infrastructure, prune the overgrown canopy and resurface the uneven, pitted portions of the trail. The student crew also installed new wayfinding signage for trail users. Working remotely at the organization’s office in Waterloo, Klopp managed project communications, community engagement, and data management.

“This has been an incredible project to be part of, especially during our current reality,” says Klopp, a fourth-year student. “The trail is an excellent reminder of how important natural environments are to our communities and our well-being.”

With a maximum grade of just three per cent, the trail is highly accessible for users and provides an opportunity to explore the outdoors in safe and physically distanced ways.

Although the students completed their work on the trail at the end of August, continuous maintenance and fundraising will be needed to keep it in shape. Klopp collaborated with four other community trail groups to raise awareness about the rehabilitation project through social media. They launched an Adopt-A-KM fundraising initiative, inviting community members to sponsor a stretch of trail through an interactive map managed by Klopp. Forty-five kilometres of the trail was adopted over the summer, raising $45,000. Another 87 kilometres are still available for adoption.

“It is so inspiring to see how the community has supported the trail rehabilitation project,” says Klopp. “Projects like this can’t happen without community care and donation. As students, it meant a lot to all of us to be able to contribute to such a meaningful community project.”

Working on the trail project offered more than a unique employment opportunity. Stanfel and Klopp plan to complete their fourth-year undergraduate thesis projects on topics related to their experiences working on the trail project. Klopp is interested in the relationship between natural environments and sustainable mindsets in community members, while Stanfel plans to investigate the impact of adjacent landowner opinions on the development process of community trails.

“Businesses and community organizations can gain a lot from working with students,” says Cerson. “With the right resources and guidance, you empower students to succeed, and that’s a strategy that worked well for us during this project.”

The fully restored trail will be officially unveiled to the public through a virtual event in October. The online event will also include a screening of material for a mini-documentary about the trail rehabilitation project.