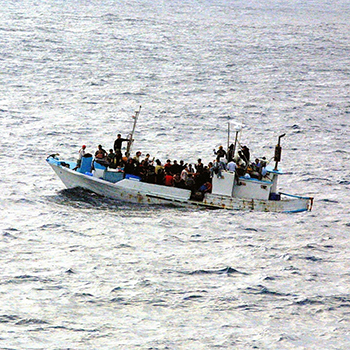 The Death of Asylum: Q and A with author and professor Alison Mountz

The Death of Asylum: Q and A with author and professor Alison Mountz

Alison Mountz begins her new book with an obituary. Rather than marking the loss of a single life, however, this obituary signals the interception of many lives by a broken global asylum system.

“Judith Butler writes that the function of an obituary is to publicly distribute grief; to alert the world to a loss,” says Mountz, professor in Wilfrid Laurier University’s Department of Geography and Environmental Studies and the Canada Research Chair in Global Migration. “That’s why I opened the book with an obituary: to alert people to what’s happening.”

What’s happening is that countries in the Global North are increasingly using remote detention centres to detain migrants who are travelling to seek asylum. Mountz’s book, The Death of Asylum: Hidden Geographies of the Enforcement Archipelago, is based on years of research in offshore detention facilities in countries such as Australia, Italy and the United States. She details how governments use the inaccessibility of remote islands to curtail asylum seekers’ human rights, far from the scrutiny of human rights groups, journalists and citizens.

In a recent interview, Mountz answered questions about her research and what it means for our society.

Q: How did the subject of offshore detention centres first capture your attention?

Mountz: As a geographer, much of my work looks at how states use geography to mediate people’s access to rights, like the right to seek asylum. Islands kept popping up in my research as sites where border enforcement, detention and asylum processing were happening. When people are travelling by boat, they often end up on an island because it is either the closest territory where they can make an asylum claim, or they are intercepted there by authorities. Interestingly, this offshoring of border enforcement is being carried out by the very states that are observers of the UN’s Convention relating to the Status of Refugees. The same countries have committed to offering state protection to those who can prove they have a well-founded fear of persecution if they return home.

Q: When conducting the research for your book, you had “unprecedented access” to offshore detention centres and immigrant-processing facilities. Describe those experiences.

Mountz: The research took place on Lampedusa Island, a small Italian island close to the coast of Tunisia, on Australia’s Christmas Island near Indonesia, and on the Pacific islands of Guam and Saipan, which are U.S. territories. As a research team, we visited the islands to conduct qualitative research on what’s happening day to day at these sites. Qualitative research was key because there’s not a lot of data available about people in detention who are intercepted at sea.

Whenever possible, we spoke to people who were seeking asylum. But you can’t just turn up at a detention centre and ask to go in. We would accompany people who had already established relationships of trust, such as lawyers meeting with their clients or visitor groups who go into facilities to spend time with people. And sometimes we would ask authorities if they would bring us on a tour of the facility or talk to us about what was happening there.

Q: Did you encounter resistance from authorities when you tried to enter?

Mountz: Yes, and all of the facilities where we did research have histories of denying access to journalists, politicians and human rights monitors. That is something that we had to deal with and one of the reasons why we tended to do formal interviews outside of the facilities with people who had been released so it was safer for them to talk about what was going on inside.

On Thursday, Dec. 3, the Balsillie School of International Affairs will host the official book launch for The Death of Asylum: Hidden Geographies of the Enforcement Archipelago by Alison Mountz.

Mountz will be joined by panelists:

"It is important to remember that asylum seekers are so much more than this set of traumatic experiences that they have had."

Q: The people you spoke to had obviously experienced significant trauma in their lives. Based on your conversations with them, did detention feel like yet another trauma to endure?

Q: What is motivating governments to take such extreme measures to deter asylum seekers?

Mountz: Asylum seekers are not politically popular, so there’s not much political will for robust, fair and efficient processing of claims. There is a lot of political will for fear-oriented, xenophobic narratives of border enforcement. Research has found that politicians succeed when they play on racialized tropes of mass border invasions, so what happens is that successive governments become more and more extreme.

Q: You argue in your book that intercepting people who are seeking asylum violates their human rights. How has this practice been allowed to continue?

Mountz: Because this happens offshore on remote islands, it’s hidden from view. And that’s intentional. People in their day-to-day lives don’t know much about what’s happening on these islands or the asylum seekers whose lives are affected. I think another factor in all of this offshoring is economics. There is a global detention industry, and it is quite lucrative.

"Canada has historically been a global leader in providing refuge for people in need of protection, but that’s something we need to be mindful of because those principles can easily slip away."

Q: There is a chapter in your book titled “The death of asylum, even in Canada.” How is Canada restricting asylum claims?

Mountz: Canada is part of this panoply of enforcement practices even though its geography is quite different. It doesn’t have the kinds of boat migration that Australia or southern European states have, but it is still carrying out some of the same practices. For example, Canada has civil servants who operate informally in foreign airports and try to identify people travelling to Canada to claim asylum. Canada has historically been a global leader in providing refuge for people in need of protection, but that’s something we need to be mindful of because those principles can easily slip away.

Q: How has the COVID-19 pandemic impacted the global asylum system?

Mountz: I think COVID-19 is hastening some of the trends that I observed in the book. There is even more support now for protecting one’s own. Countries are moving quickly to protect their own citizens for public health reasons, which makes sense, but also means that in many cases, the chance to even have an asylum claim processed or heard is becoming even smaller.

Q: What can be done to stop these human rights abuses from continuing?

Mountz: Dialogue and conversation are the way forward. The penultimate chapter of the book is all about how activists are fighting the death of asylum, and it’s where I find hope in the research that I’ve done. There was a very successful campaign by this group in Australia called ChilOut. Their starting premise was that the Australian public simply didn’t know that there were so many children in detention, so they circulated photos to build political support for policy change, and they succeeded. Successes like this are really important to remember so that we don’t throw up our hands about what is difficult material to understand.