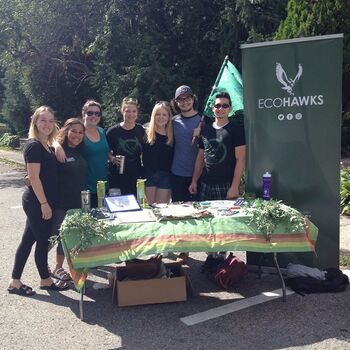 EcoHawks promote sustainability at Laurier and beyond

EcoHawks promote sustainability at Laurier and beyond

Young people all over the world are standing up for the environment this week during the Global Climate Strike. While many Wilfrid Laurier University students are getting involved for the first time, a group of eco-conscious students are continuing their efforts to make Laurier campuses greener.

EcoHawks is a student committee whose members advocate for sustainable practices at Laurier. Through initiatives big and small, they are helping students on both the Waterloo and Brantford campuses learn about their role in fostering a healthy environment.

“We try to show students that they can go green without spending a lot of money,” says Kristen Gilmore, EcoHawks co-ordinator in Brantford. A fourth-year student majoring in psychology, Gilmore has been an active EcoHawks member since she came to Laurier in 2016. Now the leader of the 15-member committee, she takes a “fun but educational” approach to planning on-campus activities.

“We host monthly events that tend to focus on topics that are trending in the media,” she says. “That’s what students are talking about, so we can add some practical information to the conversation.”

Recently, those topics have included meat alternatives and the impact of the “fast-fashion” industry. The EcoHawks team in Waterloo has taken on similar issues in their various workshops and awareness campaigns, promoting incremental change in personal habits.

“I always say that we have to start slowly and work towards making everyday changes,” says Hanna Lynch, a fourth-year Global Studies student and EcoHawks co-ordinator in Waterloo. “For example, our upcoming workshops will centre on simple, straightforward steps toward sustainability, like showing students how to bus to St. Jacobs for local produce and how to turn outdated clothing into reusable shopping bags.”

Lynch and Gilmore are both proud of Laurier’s institutional sustainability efforts. Named the most sustainable campus in Ontario in 2017 by Corporate Knights, Laurier has received numerous accolades for its water and energy efficiency. Lynch is excited by the Zero Waste Bins, which are being piloted in the Terrace Food Court on the Waterloo campus, while Gilmore is grateful for the university’s Sustainable Hawk Fund.

Dedicated to supporting student-driven ideas for growing campus sustainability, the Sustainable Hawk Fund grants up to $30,000 annually to Laurier students. Gilmore and her EcoHawks team received a grant to help them build vertical vegetable gardens in the lobby of Brantford’s Research and Academic Centre.

“Our goal is to promote composting and reduce food waste on campus,” she says. In Waterloo, the EcoHawks are well-known for their community clean-up efforts following Homecoming and St. Patrick’s Day. This year, between 40 to 50 volunteers will gather in the Quad at 11:30 a.m. on Sunday, Sept. 29 to pick up garbage on campus and the surrounding streets, in collaboration with staff from the City of Waterloo.

“This is our way to take care of Laurier and show respect to our neighbours, who have welcomed us into their community,” says Lynch. “It’s important that we do our part in a community that does so much for us.” That sense of shared responsibility is a big motivator for the EcoHawks as they work to build a better future at Laurier and beyond.

“There is a concept called the ‘seventh generation rule’ and it’s a belief that no major decisions should be made without considering the next seven generations,” says Lynch. “That really resonates with me. Climate change is happening at a rapid pace, and it’s important for Laurier students and the community at large to look ahead and do what we can to make long-term change.”