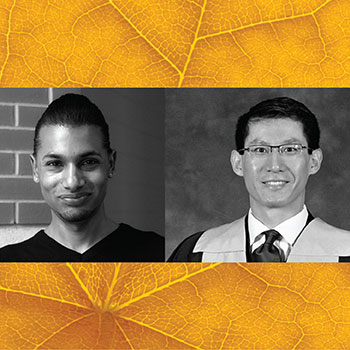 The university celebrates the impact and importance of student teaching and mentoring through the Laurier Student Teaching Award of Excellence.

In 2019, students Paul Ling and Gehan Senthinathan were among those who received the award, which recognizes demonstrated excellence in teaching roles and a positive impact on the learning and development of Laurier students.

Ling and Senthinathan have used the lessons they’ve learned at school and in life to inspire and empower others.

Paul Ling: Nobody Should be Left Behind

Paul Ling (BEd ’19) began as a first-year student in Laurier’s Bachelor of Education program in 2017. He enrolled after taking time to consider the impact he wanted to have on the world and, more importantly, the people around him.

Before beginning his journey at Laurier, Ling made a difference through global volunteer efforts and worked in health care. He realized it was time for a change when it took “all of two minutes” for a friend to convince him to switch career paths and pursue studies in education.

“Education is the key,” says Ling. “It is the best way I know to help people.”

The results of Ling’s commitment to teaching, learning and research are far-reaching.

During his time in the Bachelor of Education program, Ling sought out opportunities to help fellow students in their academic and professional pursuits. From small acts of kindness such as assisting peers with job applications to more noticeable acts of leadership, Ling dedicated himself to positively impacting the development of Bachelor of Education students.

“Paul exemplified what it means to be an inclusive and humanizing educational leader. With a growth mindset, he intentionally fostered a culture of success among his Bachelor of Education peers,” says Kristiina Montero, interim associate vice president: teaching and learning and former associate dean in the Faculty of Education. “Paul worked tirelessly to bring out the best in everyone — students, staff and faculty.”

Ling was hired as a research assistant for a national conference coordinated by Associate Professor Steve Sider, coordinator of the International Education Studies program at Laurier. The conference, held in British Columbia earlier this year, served as an opportunity for educators to learn about Indigeneity, special education and school leadership. Ling served as a coordinator for the event and managed a team of research assistants that facilitated the conference.

In 2018, Ling became a National Geographic Certified Educator. He says the intensive, six-month training in social studies, geography and economics helped him share knowledge with his peers.

“We all learn from each other,” says Ling. “During my time in BEd, I guided fellow student teachers to sharpen their own teaching practice.”

Ling currently works as a teacher with the Upper Grand District School Board.

It is 8:30 a.m. on a Friday on Laurier’s Brantford campus. As students stream in for the early morning biopsychology course taught by Gehan Senthinathan, upbeat music fills the classroom.

It’s an effort by Senthinathan to set an energetic tone ahead of the lecture. The music from his own playlist – a personal touch by the instructor – reflects his interest in establishing and maintaining students’ energy and engagement.

“Gehan has an enviable stage presence,” says Bruce McKay, associate professor and chair in the Department of Psychology. “He has a truly remarkable ability to hold the attention of his students, to educate them, to entertain them and, significantly, to read his audience not only for their degree of understanding, but why they are or are not understanding.”

Senthinathan sought many opportunities to “take the stage” while a doctoral student studying behavioural neuroscience. He worked as a teaching assistant, served as a course instructor and in 2018 represented Laurier at the provincial Three Minute Thesis competition.

Senthinathan’s approach to teaching is based on a foundation of authenticity and reflection. Whether the use of music from his own playlists or his commitment to on-campus professional teaching development, Senthinathan seeks out new opportunities to share and learn with students.

“Gehan studies the craft of teaching to refine his teaching in evidence-based ways and regularly reflects on the development of his teaching practice,” says McKay.

To cultivate collective knowledge in his classes, Senthinathan introduced “Wrestlebrania,” a semester-long challenge that sees students create course-specific multiple-choice questions and provide correct answers. Senthinathan later uses the questions and answers when developing a final exam. He describes the exercise as a “build your own multiple choice” with an integrated learning component.

Senthinathan’s passion for student success and an interactive approach to teaching inspired part-time Master of Business Administration student Raha Moradhasel to invest in her own learning development.

"I’ll never forget the first day of my Psychology of Motivation class, when he said ‘not only do I want you to succeed in this course, but I want to teach you how to become lifelong learners’,” says Moradhasel. “It’s because of Gehan that I have been motivated to learn how to learn.”

Senthinathan will defend his PhD thesis later this year. He is currently working as a lecturer in the Social and Psychological Foundations of Education Department at the State University of New York Buffalo State.