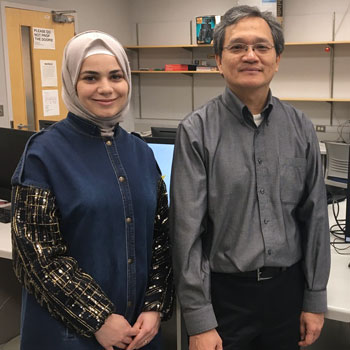 Chính Hoàng didn’t think he would ever find himself in the position to help a student like himself.

Hoàng, who studied at McGill University in the late 1970s, had arrived with his family in Montreal a few years earlier as one of the first waves of Vietnamese boat people welcomed into Canada as a result of the Vietnam War.

His opportunity to help a student from a country at war would come decades later.

In 2017, Hoàng, a Wilfrid Laurier University computer science professor, admitted Syrian student Ghsoun Zin into Laurier’s Master of Applied Computing program. It was an opportunity for Zin to continue her education and start a new chapter of her life in Canada.

On Oct. 25, Zin will cross Laurier’s convocation stage to receive her master’s degree, ready to begin the next phase of her life as proud Laurier alumna.

A New Life at Laurier

Zin came to Laurier in August 2017 with support from International Students Overcoming War (ISOW), a Laurier student-led that provides scholarships to international students whose education has been adversely affected by conflict in their home countries.

In 2012, the Syrian conflict forced Zin to flee her hometown of Saqba, a suburb of the Syrian capital Damascus, where the country’s civil war had broken out the year before. Zin was able to complete her bachelor’s degree in software engineering at Damascus University, but not without significant academic disruptions and safety concerns.

Arriving at Laurier’s Waterloo campus with her husband and young son was an experience filled with joy, gratitude and disbelief.

“I was in shock – the good kind – during my first month at Laurier,” says Zin. “I just couldn’t believe I was actually in Canada. It is every Arab student’s dream to study here.”

In addition to the scholarship, Laurier’s ISOW club organizes social and cultural events to help scholars integrate into the university community.

“Ghsoun and her Syrian colleagues are very lucky, more so than average immigrants, to have the support of ISOW,” says Hoàng, who didn’t have the same kind of institutional support when he was a student. “They need community to feel safe. Any newcomer would.”

Zin’s fall-term classes at Laurier went well, and she found herself successfully adjusting to graduate-level studies in English. She met friends through ISOW and felt a sense of community at Laurier.

The winter term of 2018 was difficult for Zin as she dealt with grief and worry about family still in Syria. Seven members of her extended family had been killed during recent fighting and she lost contact with her sister, who was living in the active combat zone of Saqba.

Hoàng and the ISOW community provided her plenty of support.

“Professor Hoàng was very understanding because he knows what it’s like to be in my situation and come from war,” says Zin. “When my situation improved and I was ready to resume my studies, he was there to help me.”

Hoàng approved Zin’s request to transfer from the computer science program’s co-op stream and into its thesis option, which allowed her to be at home with her son while conducting research for her thesis.

Hoàng also sponsored Zin’s access to Compute Canada, an online portal dedicated to advanced research computing data and strategies. The access was invaluable to Zin’s thesis research in artificial intelligence in advanced computer-led object tracking, a field in computer science that has not been widely researched.

Zin successfully defended her master’s thesis in August with Hoàng in attendance.

“She did a great job,” says Hoàng. “She has an excellent skill set and will have no trouble building a career in her field. I’m so proud of her.”

Zin is taking time to reflect on her experiences and plan the next steps for her future. She plans to take those steps in Waterloo, where she and her husband have established roots.

“We have friends here. My husband is working and our son has started school,” says Zin. “Waterloo is like home to us now.”

Studying at Laurier has changed more than just Zin’s life.

“Because of Professor Hoàng and the ISOW scholarship, my son will be able to live a life that doesn’t include war. As a mother, all you want to do is give your child a good life. Laurier has helped me be able to do that.”