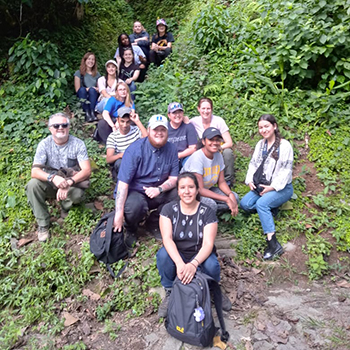 Rachel McKenzie says her perspective changed after meeting Antonio, a baby boy stuck with his family at a detention centre in Mexico.

“I felt my mindset and priorities shift to focus on the important things in life and work, to focus on being able to follow a career that will allow me to give back,” says the third-year Wilfrid Laurier University Criminology student.

The course, led by Associate Professor Stacey Wilson-Forsberg, allows Laurier undergraduate students to better understand the realities of migration, including how people become displaced, barriers along the migrant journey and how organizations offer assistance.

“These are not nameless, faceless statistics,” says Wilson-Forsberg. “They are people and, of course, the students learned that instantly when they spent time with the migrant communities at the shelters.”

“I felt my mindset and priorities shift to focus on the important things in life and work, to focus on being able to follow a career that will allow me to give back.”

The students also saw first-hand the impact foreign policy can have on migrants. In June, U.S. President Donald Trump threatened to impose a five to 25 per cent tariff on all goods imported from Mexico if the country didn’t stem the flow of migrants into U.S. territory. As Laurier students arrived at Tapachula, near the Mexico-Guatemala border, they witnessed that impact. Mexico sent 6,000 National Guard troops to block migrants travelling north from Central America, shelters and detention centres were overflowing, and bus loads of people were deported back to Central America daily.

Wilson-Forsberg said the experience of witnessing families camped out in Tapachula’s Hidalgo, was a big shock for students.

“We have to get out of our comfort zone for learning to occur,” says Wilson-Forsberg. “We have some discomfort without compromising safety, so the Mexico-Guatemala border region was an incredible learning experience for them.”

Students visited the United Nations High Commission for Refugees field office in Tapachula to learn about what the office does to help at the border.

“It was special to be able to talk to someone who works in my field and hear their first-hand experience with the topic of migration,” said third-year Human Rights and Human Diversity student Neala Hayratiyan. “It was interesting to see how the issues in one country affect others, as well as the consequences if one country refuses to help.”

“We have to get out of our comfort zone for learning to occur. We have some discomfort without compromising safety, so the Mexico-Guatemala border region was an incredible learning experience.”

One of the hardest realities for students participating in the course was that they were there to observe and learn, not assist in humanitarian aid efforts.

“I kept telling the students, the only thing we can do is to spend time with these people because, while they are waiting for asylum, they’re stuck,” says Wilson-Forsberg. “The silver lining is that 27 guest speakers who came into the classroom and joined us in the field as part of the course are 27 people who are doing something. The students learned about the impact of their efforts.”

One of the shelters students visited is being used as a detention centre to house families before they are deported. This is where McKenzie met Antonio, one of dozens of children held at the centre.

“His innocence was overwhelming,” says McKenzie. “I knew he was being deported to even worse conditions than he was experiencing in the detention centre. Meeting the people at the shelters, hearing their stories and getting a glimpse at their pain was something that will stick with me forever.”

“The most important thing I learned in this course is that no matter how bad situations are regarding human rights and migration, there is always hope and people trying to make the situation better,” says Legault.

Being able to take what is learned in the classroom and witness it firsthand was an eye-opening experience for the students.

“Being completely immersed in the issue allowed me to see the discrepancies between what we hear in the news at home and what the reality is for the people affected,” says Hayratiyan.

Read more: Laurier offers a variety of domestic and international field courses with opportunities to learn in Central America, Europe, Africa and China.