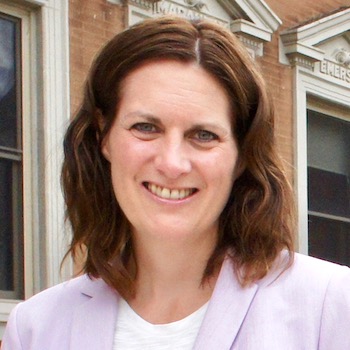 The stories vary widely but have a common thread. Whether they barely escaped war-torn homelands or had relatively straightforward journeys, all youths with African refugee backgrounds have overcome challenges. However, Wilfrid Laurier University Associate Professor Stacey Wilson-Forsberg says they face another once they are in Canada: navigating the educational systems.

Youth with African refugee backgrounds, particularly young men, are more likely than average to drop out of high school and less likely to go on to post-secondary education. People without post-secondary education tend to earn lower incomes over a lifetime, so Wilson-Forsberg is leading a national research project to investigate what might be preventing African refugee youth from pursuing further education and what could be done to change it.

The four-year national study, funded by the Social Sciences and Humanities Research Council of Canada (SSHRC), builds on a smaller Ontario study Wilson-Forsberg completed with Laurier colleagues, Professor Edward Shizha and Associate Professor Oliver Masakure, in 2017. That study, also funded by SSHRC, interviewed young African immigrant men, not necessarily refugees, some who pursued post-secondary education and some who didn’t.

“A lot of them described being streamed,” says Wilson-Forsberg, a member of the Human Rights and Human Diversity program based at Laurier’s Brantford campus. “By Grade 9, they were being told they weren’t university material and by the time they figured out what they wanted to do, it was too late – they didn’t have enough pre-university credits.”

Another finding was that the youth who had been refugees struggled more – but they were also more determined to go to university, says Wilson-Forsberg. This is a major reason why the new study focuses on youth, not necessarily male, with refugee backgrounds.

Wilson-Forsberg’s new project goes well beyond English-speaking youth in southern Ontario. It is being conducted in partnership with researchers in six provinces: at Memorial University, Université de Montréal, University of Manitoba, University of Regina and the University of British Columbia, in addition to Laurier. At Laurier, Masakure and Shizha will again be involved, with associate professors Lamine Diallo and Ginette Lafrenière collaborating.

In each province, researchers will work with refugee-serving and African-Canadian organizations to recruit approximately 80 young adults who attended high school in Canada but have been in Canada less than 10 years. In total, the researchers plan to interview nearly 500 youth, half of whom went on to post-secondary education and half who didn’t.

Another important aspect of the research will be a telephone survey of guidance counsellors. The survey aims to find out whether guidance counsellors have specific training to deal with refugees or with racism and discrimination – factors highlighted in the earlier study.

“Guidance counsellors have a big influence over program choices,” says Wilson-Forsberg. “They help with personal issues as well and often have a role in supporting newcomer youth, so they can really influence students a lot. If they tell students they should focus on vocational subjects, these students are going to listen, especially since many come from cultures where there is great respect for authority.”

A Focus on Resilience

The research will emphasize the strengths and resilience of the youth.

“We want to stop the automatic assumption that because they’re refugees and because they come from Sub-Saharan Africa, they’re automatically at risk,” says Wilson-Forsberg. “There’s an idea common in schools that all refugee youth suffer from post-traumatic stress, when in fact relatively few of them do.”

The preliminary study showed the youths’ resilience in that “there actually wasn’t a big difference between those who went to university and those who didn’t,” says Wilson-Forsberg, adding the caveat that the study didn’t follow the young men over time.

“We found them to be really entrepreneurial. A lot of them had gigs on the side – some kind of online business or youth leadership role. Yes, a few ended up in the criminal justice system, but a few who went to university did too. By and large, they did fine.”

Among the questions the researchers will pose will be what school factors led students to decide in favour of or against post-secondary education, what their career goals were when they were children and how those may have shifted over time.

“It’s time schools really started to think about their practices and curriculum, because the young men we talked to in Ontario said, ‘We don’t see ourselves reflected in the curriculum. Black history is almost absent. Nobody learns about Africa. The stereotypes are terrible,’” says Wilson-Forsberg. “We really want to work with the schools to make them aware of this strength-based resiliency perspective so they can see everyone’s potential.”

Research for the Real World

The project aims to make an impact, not just in academic journals, but directly in schools. The researchers plan to present their findings to guidance counsellors and educators in each province, as well as to African-Canadian organizations across Canada. They plan to create one website to openly disseminate their findings and another private one for the youth who participate in the study to network and have online discussions.

Wilson-Forsberg’s own love for teaching is part of what motivates her research – she won Laurier’s Donald F. Morgenson Faculty Award for Teaching Excellence in Internationalization in 2018. She is also a beloved mentor who successfully co-nominated a student, Dammee Sero, who came to Laurier as a World University Service of Canada refugee student, for a prestigious 3M National Student Fellowship Award in 2016.

“I know teachers and guidance counsellors mean well and want to do their best – but there’s still so much to learn,” says Wilson-Forsberg. “Refugees tend to be successful people if you give them a chance. They don’t keep collecting social assistance – they work and do well for themselves. What we want to do is help give them the best chance to succeed, and often, in Canada, that means obtaining a post-secondary education.”