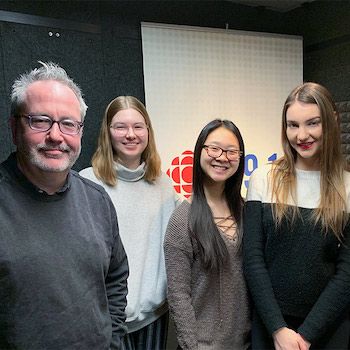 Real-world news reporting assignments and a behind-the-scenes look at the Francophone media industry left an impression on students in Nathalie Freidel’s French culture course, Media and the News in French.

“Writing the articles was unique compared to all of the other writing projects in my academic career at Laurier,” says Frédéric Giguere, a French major in Laurier’s Languages and Literatures program.

“The assignment stood out, firstly, because the deadline was very close to the event we covered – reflecting the reality that journalists face every day – and, secondly, because of the fact our work was going to be published.”

Their articles, which they also translated for print in English, were published in Imprint, the University of Waterloo’s student newspaper, in March. The publication coincided with Francophone Month in Canada and represented the first time the Imprint ran articles in French.

Article topics ranged from a francophone film festival in Waterloo and a French play performed by Western University students to French services available to the Kitchener-Waterloo francophone community and the opening of a local public francophone high school.

Freidel designed Media and the News in French with experiential learning in mind. She sees the course as an opportunity to improve students’ oral and written language skills while developing their knowledge of francophone culture through exposure to the media industry, including radio, television, print and online media.

“In order to improve your skills, you need to be exposed to the language on a daily basis,” says Freidel, an associate professor and chair of Languages and Literatures at Laurier.

Students were tasked with reading, listening to or watching French programming every day and bringing stories and ideas about what they had heard or seen to class.

In addition to the journalistic roles students took on during the creation and publication of news articles, Freidel organized in-class presentations by industry professionals and arranged field trips to CBC/Radio-Canada in Kitchener and Télévision Française de l’Ontario (TFO) in Toronto. Laurier’s Community and Workplace Partnerships team worked to connect Freidel with the organizations and helped coordinate the experiences.

“The trip to TFO's studio opened my eyes to the various media careers available to me at the conclusion of my studies at Laurier,” says Giguere.

During the tour of TFO’s studio, students received trade tips from the editor of TFO’s digital magazine, 24.7, and were immersed in a television filming demonstration. Giguere says learning about the innovative ways TFO serves the French-speaking population in Ontario was an enriching experience.

“This was particularly inspiring for me as a francophone living in Ontario,” says Giguere.

Samantha Petrou, a second-year student in the Lazaridis School of Business and Economics, studied at a French immersion high school prior to attending Laurier. She says the experiential aspects of Media and the News in French, specifically the tour and activities hosted at CBC/Radio-Canada, have helped her prepare for life after Laurier.

“This experience provided me with a perfect opportunity to practically apply my French skills in a real-world situation,” says Petrou. “Having been a French immersion student throughout high school and now pursuing a minor in French studies to complement my business degree, it is very rewarding to see that the skills and knowledge I have acquired in this course are allowing me to flourish as a student and a young working professional.”