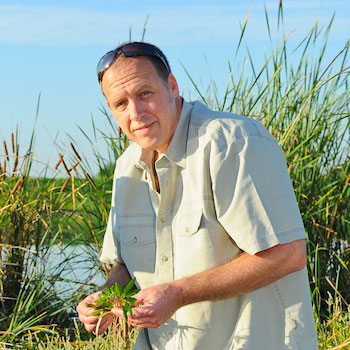 Laurier biologist working on conserving wetlands and building new ones

Laurier biologist working on conserving wetlands and building new ones

Imagine being in a wetland. Insects chirp, reeds rustle, birds paddle along, a frog plops from a lily pad into the water where fish glide under the surface. You might even see a moose or deer coming for a drink.

Wetlands, with their dry and wet areas, support tremendous biodiversity and have great ecological, cultural and economic value, says Kevin Stevens, a Wilfrid Laurier University associate professor in the Department of Biology.

But wetlands and their species are under threat from climate change. That’s why Stevens is working to both protect natural wetlands and build new ones.

For the last few years, Stevens has been researching at-risk wetland species with his colleague, Associate Professor Mihai Costea. One of these is scarlet ammannia, a purple-flowered plant that re-establishes from seed every year and therefore needs bare ground to germinate – but flooded ground to flourish. It is classified as endangered in Ontario.

A couple of years ago, Stevens and a student went looking for the plant in Hillman Marsh, near Leamington. After checking many places by boat, they finally found a small patch on a strip of land sheltered from the crashing waves of Lake Erie.

“We were thrilled because this was the second year we’d gone out looking for it and we hadn’t found it anywhere though we’d combed the entire marsh,” says Stevens.

However, the scarlet ammannia they did find were in an area colonized by phragmites, or European common reed, an invasive species crowding out native wetland plants in Ontario. So Stevens came up with a conservation plan.

“We got Essex Region Conservation Authority on board, then we went back in the spring. And we couldn’t find anything. We couldn’t even find the phragmites,” says Stevens. “It turns out that there were some winter and spring storms and the lake had deposited about a metre of sediment over top of the populations that we had found previously.”

While Stevens is cautious about drawing a direct link between these particular storms and climate change, “it is an example of how weather events can impact a species that is rare in Ontario,” he says.

“Wetland plants tend to have high-density roots that help hold soil together and prevent erosion,” says Stevens. “The vegetation provides some flood control too because as waves encounter the vegetation, their energy level drops so storm surges are buffered.”

“Sediment particles in water settle out in the wetlands and contaminants are taken up by the plants and the microbes that reside there,” says Stevens. “So water exiting wetland is cleaner than the water that enters it.”

However, the plants that clean water of contaminants can be also vulnerable to them. In one experiment, Stevens subjected a plant called sesbania to triclosan, an antifungal and antimicrobial agent common in soaps, shampoos and toothpaste – products we regularly wash down our drains.

The results were dramatic. Even at the triclosan concentrations currently found in wetlands downstream from wastewater treatment plants, the sesbania showed severely stunted roots.

“Roots move through the soil looking for nutrients for the plant. They anchor the plant and hold soil together,” says Stevens. “So a healthy root system is going to perform these functions much better than a stunted one.”

As the triclosan concentrations went up, the stunting increased – and as warmer temperatures result in higher evaporation rates, the concentration of contaminants will increase, says Stevens.

Stevens is working with industrial partners to construct wetlands that mimic the features of natural ones, channelling stormwater into a location where sediment can settle and microbes can break down contaminants.

“These constructed wetlands can receive and clean runoff from residential or industrial areas as well as provide habitat for species at risk such as salamanders,” says Stevens. “They’re also aesthetically pleasing, so they add value.”

For example, Stevens is working with consulting engineering firm C.F. Crozier and Associates to monitor a wetland in a residential development in Halton Hills. One focus of this research, which is in collaboration with Associate Professor Robin Slawson, is to optimize the performance of constructed wetlands by determining which plants are best at particular functions such as phosphorus removal.

Phosphorus is a nutrient used in fertilizer that can cause toxic algal blooms – a problem being exacerbated by warmer temperatures and increased water runoff from more intense storms.

Another aspect of Stevens’ research is examining how stormwater management ponds and constructed wetlands function over a full year, because even shallow ponds increasingly don’t freeze solid in the winter. He aims to take advantage of winter water flow by determining which cold-tolerant species can continue to remove contaminants even in winter.

“Anything we can do to remove nutrients is something that ought to be explored,” says Stevens.

A future direction of research is examining the effects of a longer growing season. Most plants go dormant over the winter but some plants are triggered to go dormant by temperature changes while others use day length, says Stevens.

“If dormancy is triggered by temperature, those species may grow for longer periods of time than those that are triggered by light. So it could change community composition. A lot could be altered.”