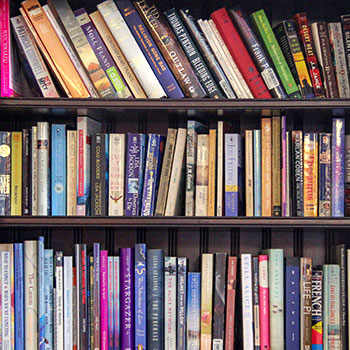 In addition to offering traditional classes examining literary works and theory, the English program in the Faculty of Liberal Arts at Wilfrid Laurier University’s Brantford campus is inviting students to express themselves through recently added courses in creative writing.

But the reasons for including creative writing classes among course offerings went beyond demand. Effective writing abilities translate into real-world ready skills after graduation.

“Employers are looking for graduates with the skills to analyze complicated arguments and communicate them in a clear, relatable way, but employers are telling us that these skills are becoming less frequent in graduates,” said Paradis. “That’s something English students have always been good at and increasingly it’s a valued job skill.”

Laurier’s senior courses in writing short stories, poetry and creative non-fiction familiarize students with the practice of putting pen to paper using various literary styles. The classes focus on how to read like a writer and how to analyze creative methods.

In these courses, students examine how language works in text and then apply that knowledge to creative writing exercises designed to broaden their skills and abilities. The senior classes allow students to focus on writing in specific genres, looking at each stage of the creative process, from inspiration to composition, editing and publishing.

“Creative writing is a fantastic model for allowing students to see connections and to express themselves in different imaginative ways, which flows into a general ability to communicate,” said Paradis. “Creative writing isn’t simply for people wanting to go on to become Giller Prize winners. It’s also for people who want to go on to be good communicators. Much of effective communication comes down to the ability to tell a good story.”

Recently, in collaboration with the Brantford English Students' Association, the department began offering workshops that allow students to attain writing skills outside of the classroom.

Laurier alumna and playwright Victoria Hudson-Muir led some of those workshops.

Hudson-Muir, who graduated from Laurier’s English program in 2018, completed her first full-length play when she was just 13 years old. During her time at Laurier’s Brantford campus, Hudson-Muir wrote The Second Self, which debuted at the Brantford Arts Block before being staged at the Edmonton Fringe Festival. Another of her plays, The Dark Discovery of Sherlock Holmes, was produced as part of Brantford’s Bell Summer Theatre Festival.

“We really had to dig into literature and analyze the text,” said Hudson-Muir. “Being in the English program helped my writing mature. I can now look at a text and really understand the subtext in it. As a playwright, you need to be able to do that because you need to know what your character really means when they speak.”

Paradis said such workshops are great for students seeking to develop writing skills in a creative setting. They also reflect how English programs are changing.

“In English, we’ve moved away from an exclusive focus on literary production, toward how to tell good stories that do the work you want them to do,” he said.

“The advantages of our small-university model are significant,” said Paradis. “Students get an intensive, highly structured program with a small-class environment, allowing students to get to know each other and their professors as they move through the program together.

“We’ve built the program in a way that takes advantage of the size of this campus, leveraging the intimacy of the program to create a supportive learning environment.”

With the introduction of the Laurier Stedman Prize competition in 2018, Laurier’s English department has taken an active role in encouraging up-and-coming writers in the secondary school system. With $10,000 in prize money, the short fiction competition, held every second year, is open to high school students in the counties of Brant, Haldimand and Norfolk, as well as Six Nations of the Grand River Territory and Mississaugas of the Credit First Nation.

“The top prize for this competition is $3,000, but the Laurier Stedman Prize is about so much more than money,” said Paradis. “It’s about giving students who are writers – which is often such a solitary pursuit – the chance to have their work read, appreciated and celebrated.”

The prize is funded through a gift from the late Mary Stedman.

The next Laurier Stedman Prize competition will open in fall 2019, with prizes to be presented during a celebration event in early 2020. As part of 2018’s inaugural competition, finalists’ stories were assessed by a jury chaired by Kathryn Carter, Laurier's associate vice-president: teaching and learning. The jury included award-winning author Deborah Ellis, whose international bestseller The Breadwinner was nominated for an Academy Award, Emily Urquhart, an award-winning writer and folklorist and former Laurier Edna Staebler Writer in Residence, Dave Levac, former MPP for Brant and Speaker of the Ontario legislature, and Heidi Northwood, dean of the Faculty of Liberal Arts at Laurier.

“We are incredibly proud to create this opportunity where the work of young writers is read by a panel of successful writers, academics and community leaders,” said Paradis. “It reinforces the driving spirit of our program: that writing is a skill to be appreciated, honed and celebrated. It is an invaluable transferrable skill no matter what path students take in their studies and careers.”