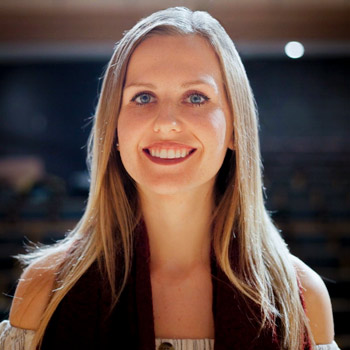 Maveal, who studied community music for two years before joining Laurier’s music therapy program in September, plans to use the $4,000 scholarship to purchase instruments for use in her practice, as well as to help fund her education. After she finishes her bachelor’s degree, Maveal hopes to earn a Master of Social Work degree and psychotherapy accreditation.

“I feel very honoured,” says Maveal. “It’s really cool to see support from people like George Stroumboulopoulos. The more recognition the field of music therapy gains, the more individuals in need will learn about and gain access to these services to improve their health and well-being. Through my work, I have seen how music can connect communities, bring joy and heal.”

Undergraduate and graduate music therapy students from across the country applied for the scholarship. Maveal was chosen for her passion and hard work.

“Something about Olivia’s application had us all – myself, past-chair Wanda Gascho-White and George Stroumboulopoulos – in agreement,” says Regan Harney, who works in fundraising and community development with the Canadian Music Therapy Trust Fund. “It was impossible to not feel her motivation and determination to work in and better the field of music therapy.

“She is following her heart and dedicating herself to music therapy and it’s people like that who make this field of work so incredible.”

Since she started at Laurier, Maveal has brought music to retirement homes, singing for the elderly at dinner time, and to a women’s shelter, encouraging women to write songs, collaborate and build a sense of community. She also worked for two years as a volunteer coordinator with the Music Therapy Association of Ontario.

Maveal is currently president of Laurier’s Music Therapy Student Association, which hosts educational, awareness-building and fundraising events throughout the year, and is completing a placement at a seniors’ home in Waterloo Region.

“Singing is my favourite thing to do,” she says. “I have so much passion for music and if I can use that to fuel important work with others, whether it’s with children with disabilities, individuals with Alzheimer’s, or women who’ve experienced domestic violence, that is what I’m meant to do.”