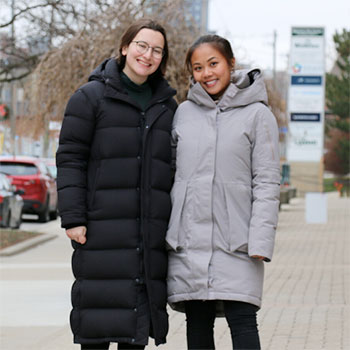 Waterloo City Hall isn’t a place that most locals would consider for socializing or relaxing. Wilfrid Laurier University students Kayli Bui and Eliza Moratz want to change that.

The Waterloo City Hall property features a stretch of brick patio space on Regina Street South and stone seating areas along the grass banks of Laurel Creek. Residents and visitors are not using the spaces as much as the city had envisioned.

Bui and Moratz were introduced to the project in the winter 2019 CityStudio course, in which students work on a municipal project identified by the City of Waterloo. Their class was tasked with developing ways for the city to increase community engagement with the outdoor public spaces around Waterloo City Hall with a low-cost, long-term solution that wouldn’t require construction.

Laurier’s CityStudio course is part of the Faculty of Arts’ C3 Innovation Labs (C3IL), which provides students with experiential learning opportunities to create positive change on the Laurier campus, in the local community and throughout the tri-cities of Kitchener, Waterloo and Cambridge.

“This was a challenging project to work on with a number of factors to consider,” says Bui, a fourth-year Global Studies major who is also completing the Community Engagement option.

Bui and Moratz considered the layout and location of Waterloo City Hall. With a v-shaped footprint at the corner of William and Regina Streets, the building doesn’t offer a traditional public square front façade, and it is located one block from the main King Street corridor of Uptown Waterloo, where visitors attend seasonal events like ice-skating and markets at Waterloo Public Square.

“Kayli and Eliza worked on a novel project for us, and their final report provides recommendations that we can utilize over time.”

Bui and Moratz conducted intense research to investigate the community’s wants and needs related to the City Hall grounds. They developed and distributed an online survey for City Hall employees, interviewed pedestrians on Regina Street South and business owners around Waterloo Public Square. They also observed the movement patterns and behaviour of people in City Hall’s outdoor spaces and held phone interviews with development and planning staff from six neighbouring municipalities.

“People were really interested in what we were doing and were happy to participate in the research,” says Moratz, who is also completing a Global Studies degree and the Community Engagement option. “Our work felt meaningful to the community.”

The students’ research findings informed “The Regina Street South Gateway Project,” a 70-page report in which Bui and Moratz recommend that the city define City Hall’s grounds as an outdoor oasis.

“Given its natural surroundings, City Hall has the opportunity to provide the community with something unique while complementing the activity at Waterloo Public Square,” says Bui.

Recommendations include illuminating the seating areas along Laurel Creek at night, planting more greenery and flowers, and adding informational signage.

“You can eat the mulberries off the mulberry trees, but without signage, people won’t know that,” says Moratz. “Educating people about the space can help them feel more connected to it.”

The report also recommends enhancing the brick patio space that runs the length of the building along Regina Street South. Adding moveable patio furniture and shade options, such as umbrellas or an awning, would allow the area to function in a variety of ways. Suggested enhancements to the streetscape from Regina Street South to Willis Way include adding a colourful pedestrian crosswalk and benches.

The students’ recommendations were met with positive feedback from the City of Waterloo.

“Kayli and Eliza worked on a novel project for us, and their final report provides recommendations that we can utilize over time,” says Adam Lauder, executive officer to the City of Waterloo’s chief administrative officer. “We always enjoy when local students can help us to provide solutions to design issues.”

As student-residents of Waterloo, Bui and Moratz say that working on the Regina Street South Gateway Project has deepened their connection to the community. “The project kept me thinking about what City Hall’s public spaces would be like in the future and how that could impact residents long-term,” says Moratz. “You don’t get the opportunity to impact your community in a traditional learning experience.”

C3IL courses also include: the Capstone Urban Sustainability Project, where Geography and Environmental Studies students consult on a City of Cambridge urban planning project as part of an in-course competition, and Introduction to Sustainability, in which students work with Waterloo Region’s townships on issues related to environmental resilience, community well-being and economic prosperity.