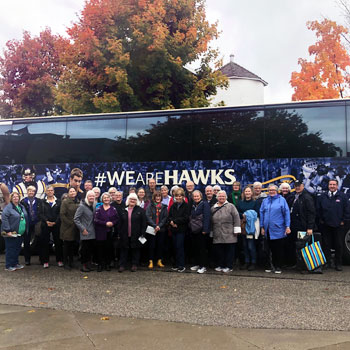 The Laurier Association for Lifelong Learning takes older adult learning on the road.

The Laurier Association for Lifelong Learning takes older adult learning on the road.

Wilfrid Laurier University’s program for older adults is on the move. Literally.

The Laurier Association for Lifelong Learning (LALL) added bus tours to the spring and fall 2019 course offerings. The program’s non-credit, university-style courses for older adults have been offered in a traditional classroom environment to this point. The addition of daylong bus tours to LALL’s course offerings meets a growing trend in older adult programming. But unlike bus tours designed for travel or entertainment, LALL’s bus tours are focused on what program participants want to do – learn.

LALL’s two 2019 bus tours on the Waterloo Region’s roots in Mennonite culture and the geology of Wellington County featured a detailed pre-departure lecture combined with on-site instruction and a themed lunch. Each course was designed and delivered by retired Laurier geography instructor and alumnus, Warren Stauch.

“The bus tours have been very well received,” says Lindsay Tayler, LALL program coordinator. “The first one filled within 48 hours of opening registration, which is a clear indication that experience-based learning is something our participants want.”

Learning outside the classroom brings course content to life in ways not possible in a traditional teaching environment.

April bus tour participants learned about Waterloo Region’s roots in Mennonite culture. In the tour’s pre-lecture, Stauch covered some of the first families to arrive in the area in the 1800s. The group then visited Schneider Haus National Historic Site, the 1812 homestead of Joseph and his wife, Barbara, who settled on present-day Queen Street around which much of Kitchener eventually developed. The tour also included stops and lectures at Mennonite farms and businesses throughout Woolwich and Wellesley townships.

“You should never stop learning and that’s something Laurier recognizes by offering LALL courses. The program is an important contribution to the community and benefits those living here."

During the October bus tour, participants stood alongside the Elora Gorge while Stauch explained how it was formed 12,000 years ago by fast-melting ice that cut into the limestone. The group also visited the Wellington County Museum, a national historic site, where they toured the grounds while learning about the facility’s origins as Canada’s oldest operating poorhouse.

LALL’s bus tours have helped Christy LeRoij and her husband, Frans, newcomers to Waterloo Region, learn more about their community. The LeRoijs moved to Waterloo from Aurora three years ago.

“The bus tours have opened our eyes to the history of the area,” says Christy. “Warren is like a walking Wikipedia. We’ve learned so much about the people and culture of Waterloo Region, and his expertise and teaching style has piqued our interest to learn more about where we now live.”

Christy says they would be interested in bus tours that address the history of manufacturing and industry in Waterloo Region, Indigenous peoples and the Haldimand Tract.

“You should never stop learning and that’s something Laurier recognizes by offering LALL courses,” says Christy. “The program is an important contribution to the community and benefits those living here.”

Given the unpredictability of Southern Ontario’s winter weather, LALL bus tours will resume in the spring and fall terms of 2020. Classroom course offerings are offered year-round, with the next semester beginning late January.