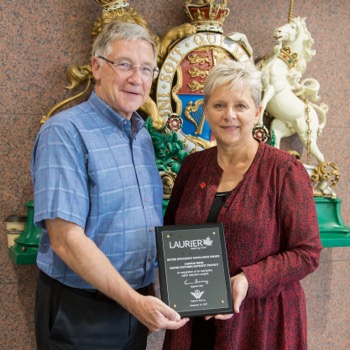 Wilfrid Laurier University has earned the Region of Waterloo’s Water Efficiency Excellence Award for its water conservation efforts in 2017.

The award was presented by Regional Chair Ken Seiling at the region’s headquarters in Kitchener on Sept. 12. Assistant Vice-President of Facilities and Asset Management Ulrike Gross, Director of Business and Facilities Operations Ron MacKenzie and Robert McCallum, project manager of the university’s sustainability initiative, accepted the award.

“As a university engaged in educating our young people, we have a responsibility to lead the way as far as sustainability is concerned,” says Gross. “It’s a very high priority for us. This project as a whole is a $50-million investment and water is only one piece of it. It’s a significant undertaking.”

Through the Laurier Energy Efficiency Program (LEEP), water fixture retrofits have been completed in more than 30 Laurier buildings in Waterloo, Brantford and Kitchener. By replacing old and inefficient toilets and showerheads and adding aerators to faucets, Laurier reduced its water consumption by about 42,000 cubic metres annually. Other energy conservation efforts include retrofitting lighting, recommissioning heating, cooling and ventilation systems and weather stripping. The first two phases of the LEEP program have focused on conservation, while upcoming phases will focus on developing renewable energy, including the integration of recently installed rooftop solar panels and energy storage into a fully functioning microgrid.

“Retrofitting toilets and water fixtures in buildings is not exactly glamorous work,” says McCallum, “but it has a huge impact on water consumption, especially when you consider how much water is consumed in a residence building or high-use dining space. When you add up the water savings in multiple buildings over the year the impact is quite significant.”

The project is funded partly through the region’s Water Efficient Technology program, which provides resources and funding to help local companies reduce water usage. Reducing water waste will save the university about $168,000 a year, which will also be used to help fund the sustainability program.

The Water Efficiency Excellence Award, presented annually by the regional government to a local business that has completed an outstanding conservation project, is not the first recognition Laurier has received for its sustainability efforts. In November 2017, Laurier was named the most sustainable campus in Ontario and the third most sustainable in Canada by Corporate Knights magazine. The university has also won the Minister’s Award for Environmental Excellence from the Ontario Ministry of the Environment and Climate Change, a TravelWise Leadership and Innovation Award and an Environmental and Sustainability Award from the Greater Kitchener-Waterloo Chamber of Commerce, among others.