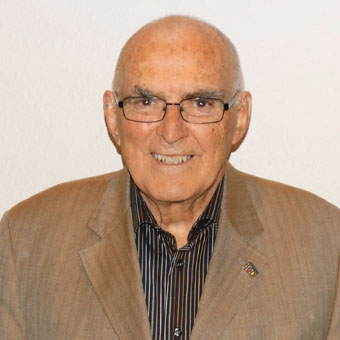 Wilfrid Laurier University is saddened by the passing of Gordon K. Greene, former professor and dean of the Faculty of Music on Sept. 23 in his 91st year.

Greene was born in Alberta in 1927 and earned his BA, BEd and MA from the University of Alberta before leaving for Indiana University for his doctorate in musicology in 1963. He was a professor and chair in the music history department at the University of Western Ontario before joining Laurier in 1978. Greene served as dean of the Faculty of Music from 1979 to 1989 and again from 2005 to 2006.

Throughout his tenure, Greene presented on medieval and renaissance topics at universities and conferences around the world, including in Switzerland and Australia, where he was a visiting professor in 1985. He received two Canada Council fellowships and was awarded seven research grants from the Social Sciences and Humanities Research Council. His specialty as a musicologist was in 14th-century French music. Outside his research, Greene was an active member of the music community at Laurier and at other universities where he taught; he directed choirs at Laurier, as well as at Alberta and Western. From 1985 to 1987, Greene was president of the Canadian University Music Society.

“To say that Gordon Greene was a force in the development of our Faculty of Music is a considerable understatement,” says Glen Carruthers, dean of the Faculty of Music. “As one of only five deans in the faculty’s 43-year history, he helped establish the faculty as one of the preeminent programs of its kind in Canada. He was well known nationally for his scholarship, leadership and humanity.”

After his retirement, Greene continued to study music and cultural history. In 2017, he published two novels, Papa Luna: Benedict XIII & the Schism and Searching for Papa Luna: A Modern Day Mystery, both based on the life of Pope Benedict XIII, one of three men claiming to be the true pope during the Western Schism in the late 14th and early 15th centuries. Greene also continued to teach a variety of courses through the Laurier Association for Lifelong Learning.

Marhee Clifton has known Greene for nearly 30 years as his student, friend and collaborator. He inspired her to be the kind of teacher and conductor he modelled.

“I have always appreciated Gordon's thoughtful understanding of music and his ability to explain how to convey each song’s deepest meanings,” says Clifton. “I have also appreciated Gordon’s unfailing support toward me personally, whether I have been performing as a soloist or leading a choir. He has also always been a part of our family life, considered as much a friend by my husband and children, as by me.”

“Gordon was gentle but decisive, and enthusiastic but thoughtful, and these are terrific qualities in a leader and colleague,” says Carruthers. “He will be greatly missed by all who knew him.”

Gordon's family will receive relatives and friends at the Henry Walser Funeral Home, 507 Frederick St., Kitchener, on Thursday, Sept. 27 from 7 to 9 p.m. and Friday, Sept. 28 from 2 to 4 and 7 to 9 p.m. The funeral service will be held at the Church of Jesus Christ of Latter Day Saints (1250 Strasburg Rd., Kitchener) on Saturday, Sept. 29 at 3 p.m., reception to follow. At the request of the family, expressions of sympathy may be made in Gordon's name to the Wilfrid Laurier University - Faculty of Music Scholarship Fund, cards available at the funeral home. Visit henrywalser.com for his memorial.