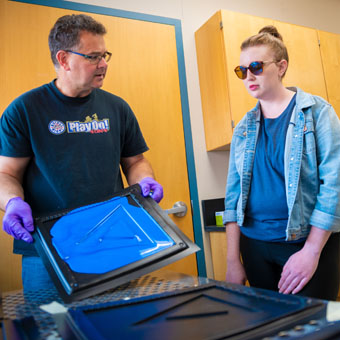 The signs, which sit in front of the bins, are colour-coded (blue for recycling, green for compost and black for garbage) and have raised symbols that can be “read” by touch (e.g. with a cane or foot) or sight. Scanlon’s design was one of 15 to win the national competition, which rewards students across Canada for creative, practical and cost-effective solutions to accessibility barriers for people with disabilities. IDeA is a Universities Canada program funded by Employment and Social Development Canada.

“Winning this award was really empowering and validating,” says Scanlon. “It was really nice to see the competition supporting and inspiring students to come up with solutions to these problems and to see support and collaboration from the government. That’s almost more encouraging than winning.”

Scanlon designed the signs in Laurier’s Science Maker Lab this past spring with support from Science Entrepreneurship program coordinator Ron Daniels, C3 Innovation Labs and the Sustainable Hawk Fund. In July, she tested the prototype signs in the Science Atrium and Concourse on Laurier’s Waterloo campus. With help from Laurier’s Student Life Levy, she plans to have the signs revised and installed across the Waterloo campus before she graduates next spring.

The floor signs serve a much-needed function for those with visual impairments. Since garbage bins don’t typically have braille labels, it can be difficult for the visually impaired to find them, much less know which bins are for garbage, recycling or compost. Additionally, people with visual impairments generally do not feel comfortable touching the bins. Instead, they tend to just hang on to their garbage until they get home for the day, says Scanlon.

“There was resounding feedback from the visually impaired community that this is absolutely needed,” she says. “We’re so tired of carrying our trash around. For those with guide dogs, if we pick up our dogs’ waste, we’ll just leave the bag on the ground because it’s just not dignified or practical to be carrying it around for the whole day."

Scanlon hopes to expand the project beyond the university and intends to put the $1,500 she won from the competition toward marketing efforts, including the creation of a website. She is also connecting with the provincial and federal governments, which have both made improving accessibility a priority.