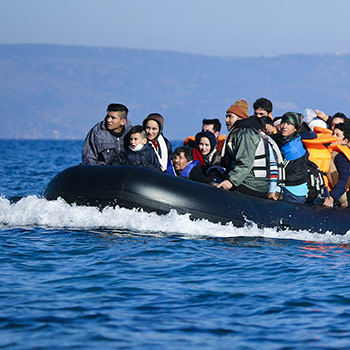 In an effort to deter the thousands of migrants crossing the Mediterranean Sea to the European Union (EU) every year, governmental agencies have stepped up offshore enforcement; however, Wilfrid Laurier University researchers have found that these measures have only succeeded in making migrants’ journeys more dangerous. In their desperation, migrants still make the trek, even as the odds of arriving alive continue to fall.

“For most migrants, no matter how difficult the journey is, they’re almost always willing to keep going,” says Kira Williams, a PhD candidate in the Department of Geography and Environmental Studies and the co-author of the study, which was published in the journal International Migration. “The European Union is trying really hard to stop these journeys, but it's almost like the more they criminalize it, the more risk the migrants have to take.”

Using data obtained primarily through freedom of information requests from Frontex, the EU’s border control agency, Williams and Laurier Professor Alison Mountz, Canada Research Chair in Global Migration, were able to analyze the agency’s activities, the number of migrants travelling by boat to Italy and Malta, and their fates. They found that the greater the enforcement activity in a given time and place, the more migrants were recorded as having either died or gone missing. The study is the first of its kind to analyze empirically the relationship between marine enforcement and migrant losses on the Mediterranean Sea.

The greater the enforcement activity in a given time and place, the more migrants were recorded as having either died or gone missing.

As the European Union cracks down on this kind of migration, by arresting and fining smugglers and others involved, the more difficult and expensive it becomes for migrants. The systematic destruction of migrant boats has meant they mostly now travel on flimsy inflatable dinghies, so overcrowded there is often no room for food, lifejackets or other supplies. Those who captain the boats have also been fined, so, more commonly, a migrant is instructed to operate the boat with only a general sense of which direction to go. Those that die along the way are simply tossed overboard.

Frontex also has extensive surveillance operations on the Mediterranean Sea to search for and intercept boats before they reach the EU’s shores. During these search and rescue operations, migrants are taken on board agency vessels and shipped to the nearest detention centre where they are held until they are questioned and their asylum claims are heard. Rejected claimants are deported.

“Laws are treated differently on land than at sea and that makes it easier for the European Union to detain and deport migrants,” says Williams. “It also makes it easier to violate their human rights.”

Most migrants are not told of their rights, their claims are not heard in a court and they never have access to a lawyer. Almost all migrants intercepted at sea are eventually deported.

“If you arrive in Italy legally, you can be detained, but you can only be detained for a certain amount of time: less than 30 days,” says Williams. “But people who are intercepted at sea have indefinite detention. These practices clearly violate not only the basic humanity of the people who make these journeys, but also their human rights.”

After making the long journey, being intercepted at sea and eventually deported back where they started, many simply turn around and begin the entire journey again.

Williams’ dissertation on the same topic looked beyond the data available, examining the testimonials of migrants, transcribed interviews and newspaper articles.

“I realized that there is a lot more to this story and that what was really missing in previous literature is that it didn't really talk about migrants as if they were people,” says Williams. “I am trying to humanize the migrants who make the journey by not only figuring out what happened to all of them, but also by trying to acknowledge their humanity — their hopes, dreams and goals.”

Most migrants travel incredible distances at great personal risk in an effort to start a new life. Many of those stopped on the way to Italy and Malta have travelled across the Saharan desert from Nigeria, the Democratic Republic of Congo and Eritrea, among others, fleeing discrimination or a military draft or hoping to reunite with their families. The journey can take months and sometimes years as individuals stop to work in cities and towns along the way to save enough money to continue. Many migrants from sub-Saharan Africa face racism along the way, says Williams. As workers, they’re often underpaid and have no legal protection.

After making the long journey, being intercepted at sea and eventually deported back where they started, many simply turn around and begin the entire journey again, albeit by a different route. Sometimes, migrants would watch their family members die along the journey and, yet, they were still willing to try again.

“EU policymakers have kind of logically thought that, if they make things really costly, migrants will be deterred from making the journey, but it’s just not the case,” says Williams. “They’re coming from a place where they need to escape, so they’re willing to try again, no matter how much they might lose.”