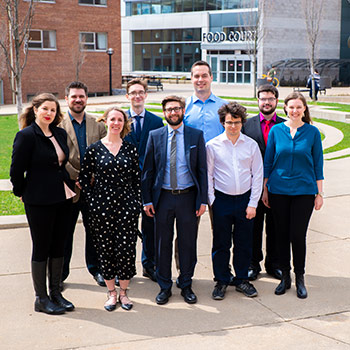 The Laurier Centre for Military, Strategic and Disarmament Studies is a national leading research centre studying the impact of war on society

The Laurier Centre for Military, Strategic and Disarmament Studies (LCMSDS) is a hidden gem at Wilfrid Laurier University. Dotted with old war propaganda photos, models of ocean-faring vessels, and military magazines and publications, the LCMSDS is one of the largest military history research centres in the country and the only one with its own workspace, located at 232 King Street in Waterloo.

Established by Laurier History Professor Terry Copp and Mathematics Professor Marc Kilgour in the late 1980s, the centre is now led by Mark Humphries, a History faculty member and Dunkley Chair in War and the Canadian Experience. It employs nearly 20 students, both at the undergraduate and graduate levels.

A quick tour of the centre demonstrates the passion and enthusiasm Laurier students have for military history.

“Since going online, our readership has gone through the roof,” said Baker. “We had over 400 print subscriptions and now we get over 6,000 downloads a month.”

The publication is produced in collaboration with WLU Press and is hosted through Scholars Commons @Laurier, a digital collection of scholarly output at Laurier. The publication includes a handful of academic research papers and features from the Canadian War Museum.

The LCMSDS also hosts an impressive library of books and texts written by associated faculty along with the Robert Vogel Library, which features an extensive collection of military-related literature open to Laurier students.

“This is one of the only places in Canada with air photos from planes from the Second World War... These were actually going to be thrown out but now we have them.”

Laurier History PhD student Eric Story has worked to set up the centre’s very own podcast studio to produce the On War and Society podcast, featuring military history scholars and research.

“It’s been really successful,” said Story. “We’d like to make it possible for students to do podcast projects on their own. Writing papers is important but producing an academic podcast is just a rigorous as an academic paper; it just requires different skills.”

In addition to the podcast, the LCMSDS also runs a free monthly speaker series from September to April featuring experts and historians at the centre.

Laurier History PhD candidate Eliza Richardson manages the physical archives of the LCMSDS. Found in the basement of the centre, people come from all over the country to explore and study its map and aerial photography collections.

“This is one of the only places in Canada with air photos from planes from the Second World War,” said Richardson. “You can see troop movements, so it’s really important to understanding military strategy. These were actually going to be thrown out but now we have them.”

The centre also holds a collection related to the 118th Overseas Battalion, one of the units local to Waterloo County raised during the First World War. Based on Lt. Col. W. Lochead’s correspondence, the centre established the Waterloo at War website to digitize the collection.

Recently, the LCMSDS completed a major digital archiving project funded by Humphries’ Ontario Early Researcher Award (ERA) and a Social Sciences and Humanities Research Council (SSHRC) Insight Grant in partnership with the Department of Veterans Affairs. The project, entitled “Through Veterans’ Eyes: Digital Approaches to the Hidden Histories of Veterans, Families and the State 1918-2000,” digitized more than 203,000 files documenting the lives of Great War veterans.

"These records provide vital insight into how soldiers returned home, reintegrated into society and then lived lives in the receding shadow of the Great War,” said Humphries. “Our next goal is to organize and analyze these records to allow researchers to examine a variety of related topics such as working-class experience, the long-term consequences of war for the body and mind, family stability, the gendered economy, and minority experiences of citizenship.”

The $1.5 million gift by the Dunkley Charitable Foundation to create the Dunkley Chair in War and the Canadian Experience has further enabled Humphries to build this digital archive.

“By having this chair position, the LCMSDS was able to support basic research, therefore enabling us to apply for these larger provincial and federal grants,” said Humphries. “By having research funding, we’re actually able to train and employ Laurier students to conduct research and participate in these major projects at both the undergraduate and graduate level.”

On May 4, the LCMSDS hosted its annual Canadian Military History Colloquium, which is in its 29th year. The colloquium brings together experts and faculty on all topics related to Canadian military history and is an opportunity for Laurier students to gain experience presenting their research to peers.

Read More About the LCMSDS