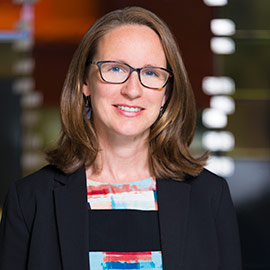 Associate Professor Janet McLaughlin works to change the world. And she has – she played a major role in improving the lives of two major groups of underrepresented people in Ontario.

McLaughlin, a Health Studies faculty member at Wilfrid Laurier University’s Brantford campus and a research associate with Laurier’s International Migration Research Centre, is being honoured as a leading woman community builder for her work advocating for children with autism and migrant workers in Canada.

Kitchener-Waterloo MPP Catherine Fife recently announced that McLaughlin would be among 10 local women honoured as part of the Leading Women/Leading Girls Building Communities Recognition Program. McLaughlin, who lives in Waterloo, will receive the award at a luncheon with other honourees in April.

Other honourees have Laurier connections too – entrepreneur Diane Matyas (BA ‘86) is an alumna and Samantha Estoesta Williams is a former executive director of the Laurier Students’ Public Interest Research Group (LSPIRG).

Fighting for Children with Autism

McLaughlin’s interest in children with autism and their families was born after her first child, now six, was diagnosed with autism before the age of two.

She stepped up her advocacy when she learned in 2016 that the Ontario government was ending funding for intensive applied behaviour analysis (ABA) therapy for children older than five. Her son was months away from turning five at the time. He had just started receiving the government-funded therapy and had already made major strides.

McLaughlin wrote letters, op-eds and reports. Fife, her MPP, read out some of these at Queen’s Park in front of the premier and other MPPs.

“I remember sometimes I’d be on the sidelines with tears in my eyes, and the other parents too, because our lives were hanging in the balance,” says McLaughlin.

"To witness that change reaffirms the importance of political engagement, sustained pressure and building alliances between advocates and politicians.”

The advocacy by McLaughlin and other parents paid off – the Ontario government reversed the decision.

McLaughlin’s son now gets 21 hours a week of funded therapy and has gone from eating only a few foods to eating better than his sister, who is not on the autism spectrum. He has toilet trained and greatly increased his ability to communicate.

“If he had just been thrown off the therapy, we wouldn’t have seen those gains,” says McLaughlin. “To witness that change reaffirms the importance of political engagement, sustained pressure and building alliances between advocates and politicians.”

A Voice for Migrant Workers

McLaughlin has been researching and advocating for temporary foreign agricultural workers since she was a graduate student.

These migrant workers come to Canada for up to eight months at a time, often for years or decades running. They work hard, low-paying jobs Canadians tend to avoid. Separated from their families and at the mercy of their employers, to whom their visas are tied, they often can’t access health care and other services because of barriers such as limited time off and difficulties with language or transportation.

Now several communities covered by the LHIN hold clinics to meet the needs of migrant workers. The clinics bring health-care providers to easily accessible places such as supermarkets and provide services such as interpreters and onsite pharmacists, an initiative McLaughlin discussed in a recent TEDX talk organized by students at Laurier Brantford.

“The clinics overcome the barriers our research identified,” says McLaughlin. “I’ve seen the difference it has made for workers, who now feel like they have a safe place to go to access health care.”

More Work To Be Done

McLaughlin says there is still a long way to go in achieving equity for migrant workers and people with autism.

Although McLaughlin sees the removal of the age cap as positive, waiting lists to access therapy have now grown even longer, she says.

“All of us who are in a position of privilege due to education have a responsibility to use that privilege to create a better world. You can’t change everything but if you pick something and focus on it, you can actually make a difference.”

McLaughlin is undertaking research on the topic with Associate Professor Margaret Schneider of Laurier’s department of Kinesiology and Physical Education. They plan to survey families of children with autism about the emotional and financial impact of navigating the maze of services and engaging in advocacy.

The pair will examine the results for differences based on factors such as income, ethnicity and immigration status. They hypothesize that people with higher levels of education, income and other social advantages succeed in getting more therapy for their children, which results in children doing better and lessening the stresses on the family.

“How can we improve the situation for all families and not create an unequal system where some people with advantages, like me, end up getting more services for their children, faster, whereas other people don’t?” says McLaughlin. “To me, that’s a social injustice.”

When it comes to migrant workers, McLaughlin would like to see the Hamilton Niagara Haldimand Brant model for health care access expanded to other areas. As part of the bigger picture, she would like to see access to permanent residency and family reunification for migrant workers, as well as the right to unionize. However, she has faced frustration in getting governments and the public to pay attention to the issue.

“Few people want to take up the issue of a group that can’t vote,” says McLaughlin.

How to Change the World

Although McLaughlin hasn’t changed the world as much as she would like, she is proud of her achievements.

“I used to be one of those people who got upset about every injustice I saw and who tried to become involved in everything, but I was spreading myself too thin and not making a meaningful difference anywhere,” she says. “At some point I realized I couldn’t solve every problem; I had to choose a couple of things to focus on. I saw academic work as a way to focus and gain expertise in a particular area and use that expertise to leverage change.”

Much of her work consists of researching and writing reports and meeting with government officials to lobby for change.

“All of us who are in a position of privilege due to education have a responsibility to use that privilege to create a better world,” McLaughlin says. “You can’t change everything but if you pick something and focus on it, you can actually make a difference.”