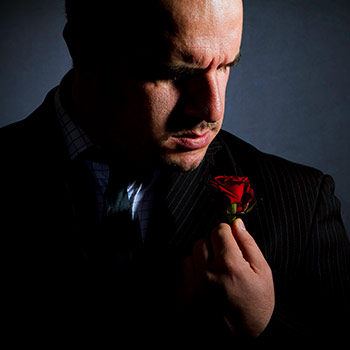 In some ways, they epitomize the American Dream. Often rising out of poverty and marginalization, they accumulate great wealth, power and influence. That they accomplish this through fraud, theft, trafficking and even murder only adds to the fascination many people have with gangsters.

The Wilfrid Laurier University Criminology course, “Gangsters, Goodfellas and Wiseguys,” allows students to learn about organized crime in North America. Developed and taught by Associate Professor Kenneth Dowler, the Huffington Post once called the Brantford campus course one of the “coolest” in Canada.

Some students sign up because they enjoy true crime stories or gangster films and appreciate the way the course brings together pop culture and fact. Others take the course with specific career goals in mind. Either way, they come to understand how various criminal schemes and techniques work, what organized crime units are capable of, and how law enforcement has managed to crack down on some of it.

“I believe that this course has helped me prepare for my chosen future career as a police officer,” says Monica Strauss, a fourth-year Criminology student who took the course in her second year. “As someone who may deal with organized crime groups in the future, I left the course knowing a lot more than I did before.”

Origins of the Mob

Crime has always been part of life but before Prohibition, it “wasn’t nearly as organized,” says Dowler.

When Prohibition was enacted in the United States in 1920, the result was an increase in organized crime and widespread flouting of the law. In fact, alcohol consumption actually went up during the Prohibition years, says Dowler.

“Without Prohibition, the American Mob would not have transformed into being one of the most powerful entities in the country. By the 1950s, the Mob was bigger than U.S. Steel.”

The gangster groups, known as mafias or mobs, that flourished during the Prohibition era generally arose from marginalized immigrant groups – mainly Irish, Jewish and Italian.

Arnold Rothstein, a Jewish mobster, “put the ‘organized’ in organized crime because he was able to make it like a business,” says Dowler.

Organization and cooperation between gangs were essential because nationwide alcohol production, smuggling and distribution required it. Irish gangsters in Chicago were less willing to work together, which resulted in murderous “beer wars” and a decline in the power of the Irish Mob.

When Prohibition ended in 1933, organized criminals had already begun moving into other areas such as national-level gambling and labour racketeering.

“Jimmy Hoffa, who was the head of the Teamsters at one point, basically used the pension fund as his own personal piggy bank,” says Dowler.

Gangsters also profited from kickbacks, which set back the fight for workers’ rights.

“If you wanted to work on the docks of New York, you had to pay a gangster, and anyone who didn’t like it might end up being murdered,” says Dowler.

As for gambling, the Mob operated some illegal lotteries but also profited handsomely from the legal casinos of Las Vegas and Atlantic City. There, mobsters hid behind legitimate-looking front men but pulled the strings in the background. A major strategy was called “the skim.”

“A Mob associate would go into a counting room with all this money and a mobster would walk in there and just take something like 10 per cent off the top of all the money that was brought in,” says Dowler.

Gambling, labour racketeering and black market trading were lucrative – but small potatoes compared to the drug trade, which by the 1970s became the focal point of Mob activity.

The “Pizza Connection” started in the mid-1950s when gangsters met in Sicily to discuss ways to move heroin into North America.

“They called it the Pizza Connection because they used to smuggle the heroin with pizza ingredients,” says Dowler. “They had all these pizza shops across the Midwest and even in Hamilton and Montreal, and that’s where they would distribute it.

“One reason it was brought down in the ‘80s was because one of the mobsters’ sons couldn’t remember the code names and his uncle got so mad at him that he said, ‘Shirt means heroin’ and so forth, laying out all the code names on the phone. Of course, the police were listening.”

Big Busts and the Next Generation

Wiretaps, bugs and informants were among the tools police used to bust gangsters in the 1980s and ‘90s. New laws enabled courts to prosecute people for simply being members of criminal organizations, which put some key mobsters behind bars.

“Unless you have political connections, you’re not going to have the same level of power, and these days the gangs don’t have the political clout they once had.”

Other organized crime groups, such as different ethnic and biker gangs, have gained prominence, sometimes by working with the traditional Mafia. In Canada, the Hell’s Angels exert control over the drug trade by working with a variety of gangs.

The legalization of marijuana in Canada will put a dent in gang profits but organized criminals are already moving into other areas, such as designer drugs, cybercrime, corporate crime and the stealing of corporate credit, says Dowler.

“It’s like any business. They want new streams of revenue.”

Gangs have also changed the way they are structured. Alessandro Magi, who will graduate from Laurier in June and plans to start a master’s in the fall, says this knowledge, gleaned from the course, has helped him in his current job with the Canada Border Services Agency.

“Knowing that groups are now organized in cell-like, lateral structures, as opposed to draconian hierarchal structures, is key in investigations,” says Magi.

Mature student Laszlo Polyak, a manager with the Alcohol and Gaming Commission of Ontario, says the course was directly relevant to his work – plus, it was fun.

“Dr. Dowler provides a ton of material in his lectures and adds colour commentary that makes you want to attend every lecture,” says Polyak. “I enjoyed the course and would recommend it to anyone who wants to gain a deeper understanding of organized crime and the Mafia in particular.”