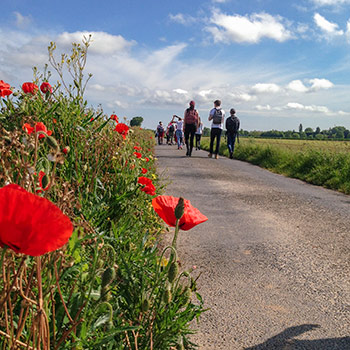 For many university students, the two world wars are topics usually relegated to the pages of a history textbook. But for a group of students at Wilfrid Laurier University’s Brantford campus, the stories of sacrifice and victory are anything but past tense.

For two weeks in May, Laurier History professors Peter Farrugia and David Olivier led a group of students and Brantford community members through the battlefields, cemeteries, monuments and museums in Northern France and Belgium on a critical exploration of the remembrance and commemoration of the First World War, the Second World War and the war dead.

“The course gets students thinking about the concepts of memory and commemoration,” says Olivier. “We look at how the wars are remembered, why certain people are commemorated, and how this may change with time and circumstance.”

The two world wars have long since passed, but the reverence for fallen soldiers of the British Commonwealth (including Canadians) is very much alive among residents in Northern France and Belgium.

Farrugia and Olivier’s group attended The Last Post Ceremony at the Menin Gate Memorial to the Missing in Ypres, Belgium on the first evening abroad. The monument – a neo-classic archway that opens to a centre hall on Ypres’ main street – bears the names of more than 54,000 Commonwealth soldiers who died prior to August 1917 and who do not have graves.

“German cemeteries like La Cambe commemorate the thousands who died fighting for their country, and although we know the cause was wrong, there is still the question of how do we remember it? Memory and commemoration becomes difficult when it is coupled with the unspeakable like the Holocaust.”

Since 1928, Ypres residents and tourists have gathered at the monument each night to honour the sacrifice and memory of soldiers lost during the Battle of Ypres.

“We try to reveal to students on this trip how relevant the world wars remain to those living in Northern France and Belgium,” says Farrugia. “For them, Canadian soldiers particularly are people who came from thousands of kilometres away to liberate their countries and they almost talk about it in the present tense. That is very striking for our students.”

Third-year student Erin McHarge spoke with a British tourist at Menin Gate; the man’s father was a Commonwealth soldier who fought at Ypres. He shared an excerpt from his father’s war diary with McHarge, which described the horrific displacement of the town’s residents as a result of the fighting.

“He spoke with such passion about his father’s experience, and he wept while reading the diary passage,” says McHarge. “It became very obvious to me that the war is still so relevant in the everyday lives of some people.”

The group had a similar experience while visiting the memorials of Dieppe, which mark the mass loss of Canadian troops during the raid in August 1942. A woman from Association Jubilee, a French-led memorial organization, offered tearful thanks for Canada’s war efforts and sacrifices.

“There is a constant reminder of the wars’ significance in Belgium and France, as well as the respect and love for Canadians, especially those who have served,” says McHarge.

At each stop on the course’s itinerary, Farrugia and Olivier gave onsite lectures, or stands, to contextualize the location’s history and significance. The stand at La Cambe War Cemetery, where more than 21,000 German soldiers from the Second World War are buried, addressed a difficult yet relevant topic: how is the enemy remembered?

“German cemeteries like La Cambe commemorate the thousands who died fighting for their country, and although we know the cause was wrong, there is still the question of how do we remember it?” says Olivier. “Memory and commemoration becomes difficult when it is coupled with the unspeakable like the Holocaust.”

Second-year student Kayla Murray thought about the question as she walked among the small black stone crosses that represent La Cambe’s fallen.

“I wasn’t sure how to feel at first,” she says. “Should I feel sad for them? It was conflicting at times but I knew that not every German soldier in the Second World War was a Nazi. Some of them were just young men that didn’t have a choice.”

“The centre fails to mention why there was a war or what happened during the conflict. The interpretation of the past, in this case, was shaped by contemporary concerns and attitudes, and that can be problematic.”

The group also visited the cemetery’s interpretive centre, an experience that required the students to think critically about the impact of passed time on memory and commemoration. The centre was built in the mid-1990s during a time of improved relations between France and Germany. While promises of peace and unification are evident throughout the centre, Farrugia says there is one critical piece of information is missing from the story – the war itself.

“The centre fails to mention why there was a war or what happened during the conflict. The interpretation of the past, in this case, was shaped by contemporary concerns and attitudes, and that can be problematic.”

Connecting to the Past

To enrich onsite learning, all course participants (including Farrugia and Olivier) conducted research on a soldier, nurse or civilian from either war before the field experience. The biographical profiles were presented during stands at relevant locations throughout the trip. Murray, a Public Health student, prepared a biography on Brantford’s Katherine Maud Macdonald. She was the first Canadian nurse killed in the First World War. Macdonald was stationed at a British hospital that was bombed during a German air raid in May 1918.

Murray read Macdonald’s profile while at the Ring of Remembrance Monument for Peace at Notre-Dame-de-Lorette, France’s largest military cemetery. Five hundred 10-foot tall metal panels stand in a circle; each panel lists 1,200 names in alphabetical order of service personnel killed during the First World War. Murray found Macdonald’s name and gave her stand on the nurse, almost 100 years to the anniversary of her death.

“The biographical profile was an important project to do,” says Murray. “You came to understand that names on monuments are more than just names. They were real people.”

The project hit home for McHarge, who profiled her great-grandfather, Warrant Officer John George Sherring, who served with the Canadian Army Medical Corps during the First World War. She read his profile, a piece of her own family history, at the Canadian National Vimy Memorial, near the town French town of Arras.

“My great-grandfather would have helped treat and serve the injured at Vimy,” says McHarge, who had access to her great-grandfather’s war diaries for the project. “It was a wonderful opportunity for me to read his profile at the Vimy memorial.”

The battlefield tour course is offered every two years in May and is supported by the Laurier Centre for Military, Strategic and Disarmament Studies, the Office of the Dean of Liberal Arts, the senior executive officer at Laurier’s Brantford campus, the Office of the Vice-President: Academic, and Laurier donor Don Wilkin.

“Without those contributions, we couldn’t make this work,” says Farrugia.

Farrugia says he would like to offer the battlefield tour course in the spring of 2020. Interested students and community members may contact him at pfarrugia@wlu.ca for further detail.