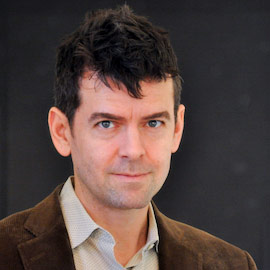 Waterloo – “We are pleased to inform you…” “We are sorry you had a bad experience with…” What could be wrong with these standard customer-service phrases? A lot, according to research by Grant Packard, assistant professor of marketing at Wilfrid Laurier University’s Lazaridis School of Business and Economics.

Packard, an expert in language, marketing and consumer behaviour, says that when it comes to the personal pronouns employees use in customer-service interactions, almost everybody has it wrong.

“The theory in marketing is that you should have a customer orientation, which from a language perspective means customer service people should use ‘you’ a lot, talking about ‘your needs,’ ‘your product,’ ‘your size,’ etc.” said Packard. “Firms train employees to represent themselves as part of the organization, so they are taught to use ‘we.’ But we found that the words everybody avoids – ‘I’ and associated first-person-singular pronouns – were actually where all the action happened.”

Packard began his research because he noticed that in customer-service interactions he experienced, individuals ranging from servers to CEOs referred to themselves in the plural – not the way people usually speak. He and his colleagues started by examining more than 1,000 customer service emails from a Canadian online retailer, focusing on how often different pronouns were used. They linked this to the customers’ purchase behaviour after the service interaction.

“We found a really strong effect that the use of the ‘I’ pronoun and its variations resulted in more purchases,” said Packard.

Next, Packard and his team designed experiments in which, in some interactions, the purported customer-service agents referred to themselves in the singular, and in others, in the plural. Experiment participants were then asked to rate their satisfaction with the agent and their attitude toward the company the agent was representing. The researchers found replacing ‘we’ with ‘I’ had a positive effect.

Packard’s team also ran experiments that added or subtracted “you” to test the popular idea that a “customer orientation” would be helpful. They found the use of “you” made no difference in most circumstances. In some, it actually had a negative impact.

“When the agent used ‘you’ really heavily, it had a negative effect because it signalled the agent was blaming the customer,” said Packard. “It’s your credit card, it’s your purchase, which implied it’s your problem.”

Although most of Packard’s research focused on email interactions, they also performed face-to-face experiments and used field data from telephone conversations. The same conclusions held.

It’s not easy to change the way people speak. Therefore, though the pronoun research is worth sharing, employee training should focus on “showing the customer you’re there for them as an individual,” said Packard. “In a customer-service role, the employee doesn’t just serve the company. They’re there to be both the customer’s agent and the firm’s agent, and they should take the part of being the customer’s agent seriously.”

Packard’s research may also apply to other fields. For instance, in preliminary work with a major Toronto hospital, he was informed that medical practitioners also make heavy use of “we” pronouns.

“I haven’t empirically tested this yet but I imagine health-care settings are a context where you really need personal care,” said Packard. “It matters when it seems like a doctor or nurse cares.”

Packard’s work will be published in the Journal of Marketing Research later this year.

Lazaridis School of Business and Economics