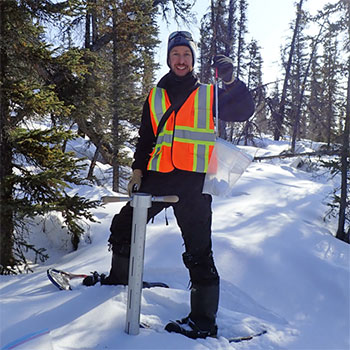 The award, which provides $50,000 in support over two years, is given to students who have shown exceptional promise, academic excellence, leadership and a strong commitment to northern research.

“This is a tremendous honour and opportunity for two talented and successful researchers,” says Douglas Deutschman, dean of the Faculty of Graduate and Postdoctoral Studies. “The climate is changing more rapidly in the Arctic than in the temperate and tropical regions of the planet. Canada’s North is one of the most environmentally sensitive parts of the world, making it an ideal place to study the impacts of global climate change. The W. Garfield Weston Award for Northern Research will allow the students to focus on their research in the rapidly changing northern environment.”

Ensom is studying the temperatures and flow of streams between Inuvik and Tuktoyaktuk in the Northwest Territories. Because of climate change, shrubs seem to be growing and expanding across the tundra and holding more snow in stream channels. The extra snow and plants act as insulation, holding the summer heat in the earth longer. This may keep small streams flowing longer into the winter, which poses challenges for building and maintaining infrastructure, including the new Inuvik to Tuktoyaktuk Highway. It also has significant consequences for surrounding ecosystems.

The newly built highway allows researchers like Ensom, his advisors, professors Philip Marsh and Steve Kokelj with the Northwest Territories Geological Survey, and others to study land that was more difficult to access in the past.

“It’s showing us what was likely already happening on the landscape but was just more difficult to observe,” says Ensom. “It has sometimes been assumed that small streams didn’t flow in the winter or, if they did, it was not enough to make a difference, but we’re seeing evidence that these streams move enough water to cause challenges for infrastructure and to affect other aspects of hydrology.”

Kershaw is studying the hydrology of a small basin in the Mackenzie Mountains in the Northwest Territories. In particular, he’s examining how different terrain types affect how water is stored, transported and lost throughout the year. These mountain areas are especially vulnerable to climate change, he says, and understanding how the landscape functions today can help scientists better understand and predict how similar environments will change as permafrost continues to thaw throughout the North.

Kershaw and his advisor, Professor Bill Quinton, have been working with the local First Nations community, the Sahtú people, who live along the rivers downstream from the basin. The basin is not only their source of drinking water, but also shapes the landscape they live in and sustains the plants and animals they rely on.

“If the highs and lows of those rivers change and become less predictable, the whole rhythm of access and subsistence is affected,” says Kershaw.

For both researchers, the award means they can concentrate on their work without worrying so much about how they will pay the bills.

“It allows me to have more discretion and autonomy to make choices,” says Kershaw. “Maybe I can stay an extra couple of weeks and get that window of direct observation. Otherwise, I’d have to pull the cord because I’m more tightly bound to a budget that’s not my own.”

“The award is a really great demonstration that the pursuit of research in the North by people based in the North is important,” says Ensom. “It’s really encouraging to be chosen out of a group of really high-calibre candidates.”