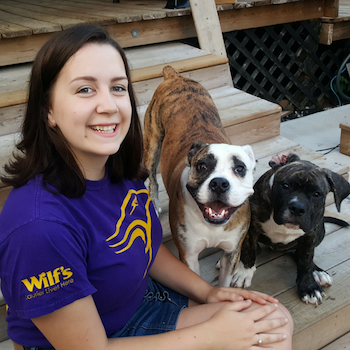 Imagine a contented purr or woof. If foam mattress toppers discarded by Wilfrid Laurier University students could hear, that’s what some of them might be hearing now.

Every year since 2015, Laurier students moving out of residence have participated in the Move-Out program, which diverts thousands of kilograms of waste from landfills. A program for off-campus students was added in 2016 and now it’s a well-established end-of-term tradition for students of all levels to drop off their unwanted furniture, household items, clothing, textbooks, electronics, and non-perishable food, all of which goes to charity or recycling.

This year, however, a challenge emerged in the form of foam mattress toppers. Between 20 and 30 of the popular items were dropped off and Move-Out organizers from Laurier’s Sustainability Office initially didn’t know what to do with them. The program’s established community partners couldn’t accept them. They couldn’t be traditionally recycled. But Brooke Dietrich, a summer sustainability assistant at the Sustainability Office, was determined not to let them end up in landfill.

So Dietrich, who is going into her fourth year in Global Studies and Sociology, got on social media. Though a contact, she heard about Ground Search and Rescue of K-W, a volunteer organization that helps find lost pets in Waterloo Region. Community volunteers often foster stray pets until they can be reunited with their owners or adopted.

Dietrich was thrilled not only because the toppers would get a second life but also because she’s a pet lover.

“I’ve had three rescue dogs in my life so they’re very close to my heart,” says Dietrich. “To be able to give them some comfort when they’ve been through a terrible ordeal is a wonderful thing we can do.”

It’s not yet clear if the partnership with Ground Search and Rescue of K-W will continue but Dietrich hopes it does.

“Mattress toppers are a big item everyone is buying in September but nobody is pushing any solutions in April or in August when people are leaving,” says Dietrich, who is also a don. “Creating some sort of program or partnership would give first-year students peace of mind, to know they’re contributing to something greater than their own comfort.”