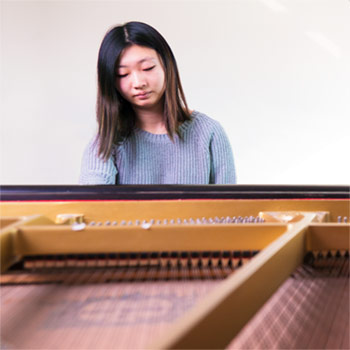 Janet Lu sat tall at the piano as she opened the evening’s recital with Claude Debussy’s Claire de lune, her favourite score of the French composer and one she has performed countless times.

But this performance was to be very different for Lu, a music student at Wilfrid Laurier University.

She wasn’t playing in Waterloo at Laurier’s Maureen Forrester Recital Hall. Instead, her music filled the air of the Priory of Chirens, an 11th-century monastery in the town of Chirens, which sits in the foothills of the French Rhône Alps.

It was just one of several larger-than-life performance opportunities Lu experienced during her six-month exchange at the Conservatory of Lyon in early 2017.

Lu embarked on the study-abroad experience with encouragement from her piano instructor and Laurier Associate Professor Heather Taves.

"Professor Taves encourages her students to be open to new experiences that instil curiosity,” says Lu. “With her encouragement, I’ve participated in summer music programs in Canada and abroad, which helped to prepare me for my exchange in Lyon.”

The Conservatory of Lyon is one of two national conservatories in France that offer education in music, theatre, dance and vocal studies. More than 2,400 students study at Lyon and participate in nearly 300 public performances to showcase the exceptional student talent.

“The exchange program in Lyon made it possible for me to play in very elaborate spaces,” says Lu, who is in her final term at Laurier. “As a young musician, I think it’s important to play in a variety of settings and for different audiences.”

From January to June, Lu participated in performances in some of the city’s most distinguished venues: the Goethe Institute, a Franco-German cultural centre; St. John Palace, a Gothic palace-turned-library located in city’s fifth district; and the Museum of Fine Arts, where Lu played for audiences in a gallery room with walls adorned by paintings of master Impressionist artists including Claude Monet and Edgar Degas.

“The performance at the Museum of Fine Arts recreated a period in French cultural history for a present-day audience,” says Lu. “It was part of an interdisciplinary project for audiences to view 19th-century Impressionist artwork set to music composed by the artists’ contemporaries.”

Acquiring the skillset to study and perform in one of France’s leading conservatories takes hard work and practice. Taves knew Lu had the ability – and confidence – to thrive on the exchange.

“Janet is a poetic and passionate artist with a fierce dedication to develop her technique," says Taves of the student-pianist. “Before she went to Lyon, we carefully chose suitable repertoire, such as music by French composers, to prepare for her studies.”

Exchanges at the Conservatory of Lyon are designed to take place during a student’s third year; their final year of study is completed at Laurier to prepare for a graduation recital and graduate school auditions.

In Lyon, Lu received personal instruction from esteemed pianist Alain Jacquon, the conservatory’s director and a piano professor. During their daily 90-minute classes, Lu built on the performance foundations she acquired at Laurier with Jacquon helping her to advance her artistry and technique.

“Professor Jacquon is a thoughtful artist who has extremely high standards for his students,” says Lu. “He is an inspired and dedicated pedagogue who focused on every detail – and that allowed me to develop my musical voice and reach a musical potential I didn’t think was possible.”

More than three hours of practice followed her lessons with Jacquon and the conservatory’s piano education team. When individual practice was complete, Lu collaborated in student-led chamber music ensembles for extra credit.

“The student camaraderie at the conservatory reminded me of Laurier,” says Lu. “That was a nice feeling to have so far from home.”

“The exams were intense, and the stakes felt so high,” recalls Lu of her first open format examination.

Students’ names and final grades are also posted publicly within the conservatory – a practice not exercised at Laurier under Ontario’s Freedom of Information and Privacy Protection Act. Despite receiving a glowing grade, Lu admits it was difficult to have her final mark posted for all to see. But a public facing “review” of her ability is something she will need to get used to if she pursues a career in piano performance.

“People are going to see me play; some will like me and some won’t. Critics will write their reviews, and anyone can read them. I will have to be prepared for whatever critique they give.”

Studying abroad has prepared Lu for learning and performing beyond Laurier’s Waterloo campus. She has a realistic understanding of how to prepare for study at internationally ranked graduate programs. Lu is currently applying to graduate programs in piano performance at Canadian and international institutions. Regardless of which campus Lu calls home in September 2018, she will adjust to her new learning environment because “music transcends all barriers, all cultures, all languages.”