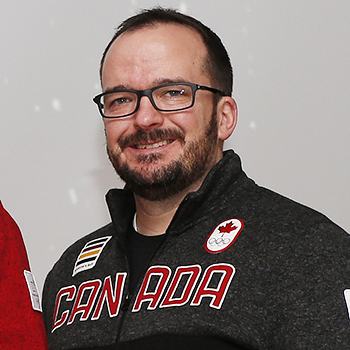 Leading Canada's curlers at the Games

Leading Canada's curlers at the Games

Heading toward the Olympic Games in Pyeongchang, Paul Webster was spending as much time on the phone with travel agents as he was preparing Canada’s curlers to defend their 2014 gold medals.

As curling team leader and chief liaison with the Canadian Olympic Committee, Webster’s work to arrange the logistics of flights, lodging and access to the athletes’ village starts two years before the opening ceremonies, culminating in a last-minute flurry to make sure Canada’s 21-strong curling contingent gets to South Korea without a hitch.

“The Olympics are what we lovingly call the five-ring circus. It’s so much bigger than anything else we do,” says Webster, who graduated from Laurier in 1998. “I’m knee-deep in spreadsheets these days. I’m kind of looking forward to Korea for a break.”

But Webster will hardly be kicking back once the Games begin. The former Golden Hawk is also head coach of the men’s and mixed doubles curling teams, and he expects to be in tough against a strong field.

“The competition in curling these days is extremely equal,” Webster says, explaining that there are six or seven teams that in his estimation have a shot at winning gold. “I’d like to think we’re in the top half of those teams ... but if we struggle and get out of the gate slow, it’s going to be tough. Once you get there, you still have to bring your A game.”

Webster thinks the increased parity in curling has something to do with the proliferation of Canadians coaching abroad, as well as a mentality shift among athletes toward a greater focus on training, conditioning and nutrition.

“It’s gotten really good and it’s fun that way,” he says. “We want our sport to be healthy.”

The veteran of three Olympics and 14 world championships has high hopes for the Canadian teams, which feature fellow Laurier alumni John Morris in mixed doubles and Brent Laing with Team Koe on the men’s side.

“I’ve known those guys forever,” says Webster, who played with and against Laing as a young curler and later coached Morris for a season at Laurier.

Webster is especially excited to watch Morris and Kaitlyn Lawes in mixed doubles curling, which is making its Olympic debut this year. Morris was a gold medallist as part of the men's curling team at the 2010 Olympics in Vancouver, while Lawes won gold as a member of the women's team at the 2014 Games in Sochi, Russia.

Webster’s love of curling started when he was a kid growing up in Peterborough and blossomed in high school and university, helped by the chance to travel for tournaments – a thrill that has only multiplied as a professional coach.

“I think the opportunities and the people you meet are paramount,” he says. “I’ve been all over the world with curling. When a sport like that makes such a large world small, it hooks you in.”

Though he had success as a young curler, including a 1995 Ontario junior men’s championship, Webster turned his attention exclusively to coaching after becoming a high school physical education teacher in 1999. He later moved to Calgary and today does triple duty as a national coach with the Canadian Curling Association, high performance coach with the Alberta Curling Federation and curling director at Glencoe Curling Club.

As a coach, Webster says he strives to nurture long-term relationships with his athletes – many of whom will play competitively for decades – and constantly seeks to improve his skills and qualifications in order to be an effective leader.

“Our sport is ever-evolving,” he says, pointing to new rules, new equipment and even a new branch of the game in mixed doubles. “Where we were in 2014 probably wouldn’t even win a medal in 2018.”

Webster loves the off-ice camaraderie for which curling is known and credits his Laurier experience for teaching him the importance of balancing sports and life.

“I was surrounded by some phenomenal professors who allowed me to study and play,” says the kinesiology grad and former second team varsity rugby captain, making special mention of his thesis advisors, Stephen Wenn and Bill McTeer. “Having that culture of sport and education was really important and I will always encourage it with my kids as well.”

It was also at Laurier, listening to Wenn lecture on the history of the Olympics, that Webster first dreamed of what it would be like to represent his country on the international sporting stage.

“As a 19- and 20-year-old student listening to that, it’s really hard to connect the dots that you’ll ever attend (the Olympics),” says Webster. “The opportunity is definitely there, but getting ready to attend my fourth Olympics is definitely surreal."

Team Canada will have a tough act to follow after 2014, when for the first time in Olympic history the same country won gold in men’s and women’s curling. But Webster says his athletes are ready to compete and again wear the maple leaf with pride.

“I’ll never take the Olympics for granted,” says Webster. “It’s a phenomenal opportunity and we want to perform.”