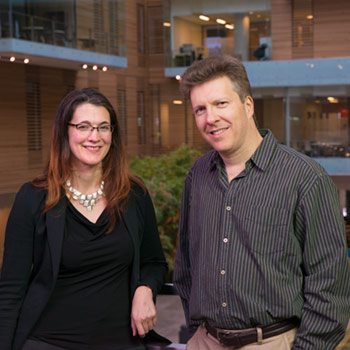 Got ink? Whether you have a ring tattoo, full sleeve or nothing at all, it may be an indication of how you think about the future, according to two Wilfrid Laurier University professors.

Economics professor Bradley Ruffle and psychology professor Anne Wilson conducted a study that concludes people with tattoos, particularly ones that can’t easily be covered up, are more impulsive and short-sighted than people without.

Once largely associated with criminals and sailors, tattoos have become much more mainstream. Today, 40 per cent of Americans aged 26-40 have at least one tat. Nonetheless, negative perceptions about tattoos persist, especially among the older generation – people more likely to be hiring managers. Therefore, Wilson and Ruffle hypothesized that people with tattoos may be more prone to making short-sighted decisions that may not take into account the implications of their ink on employment opportunities.

Testing How Much People Consider the Future

Wilson and Ruffle decided to test their hypothesis through a multi-part online survey taken by more than 1,000 Americans registered with Amazon Mechanical Turk, an online marketplace for work that requires human intelligence.

In the first part of the study, participants had to choose between a series of options in which they could receive a smaller amount of pay within a day or a larger payment in three weeks. The immediate payment was always $1 USD; the delayed payment gradually increased from $1 to $2.50.

Ruffle and Wilson found a distinct pattern – people without tattoos switched to the delayed payment option much earlier than people with visible tattoos. People with easily hidden tattoos were in the middle. In other words, those with visible tattoos were found to be more present-oriented than the non-tattooed, while those with readily hidden tats represented an in-between case.

Wilson and Ruffle then asked questions to determine how much participants considered the future in other areas of their lives. Questions included whether they were saving enough for retirement, whether they smoke, and how often they post personal information or controversial material online – online posting has been likened to tattoos for its virtual permanence.

The researchers also asked a few questions widely used to measure subjects’ impulsivity. Each of the questions, which read like math word problems, has an intuitive but incorrect solution. The correct answer is unintuitive and requires participants to overcome their impulse to write down the intuitive response.

Both types of questions pointed the same way as the cash-based experiment, says Ruffle.

“Those who have at least one tattoo that can’t be readily hidden with clothing were more short-sighted and impulsive across these different measures than those who don’t have a tattoo.”

The researchers also asked about participants’ tattoos, including how long they thought about them before they got them. They found people who got inked spontaneously were more impulsive. However, there was little difference between those who considered their tattoos for a few days versus a few years. In fact, Wilson and Ruffle found that even people seriously considering getting a tattoo within the next year behaved much like people who already had tats.

There was one major difference between men and women with hidden tattoos only.

That’s an important finding because more women have tattoos than men, says Wilson.

Though the duo don’t have an evidence-based reason for this gender difference, Wilson speculates it may stem from the fact that it is more socially accepted for women to physically adorn their bodies and faces. Also, research in other domains indicates that women on average are more far-sighted and less apt to take risks.

If you’re considering getting a tattoo, Ruffle and Wilson have some advice for you.

“If you’re young and starting out, you might be well advised to get a tattoo you can readily hide,” says Ruffle. “It is occupation-dependent, though. There are some occupations where having a tattoo would be perfectly acceptable and may even confer an advantage.”

For instance, since tattoos signal decisiveness, visible ink may be a good sign of an athlete who can make split-second decisions such as whether to shoot or pass.

On the other hand, there may be more discrimination against the tattooed in fields with long time horizons, such as those that involve cultivating long-term customer relationships or caring for patients over their lifetimes.

Another point to consider: Even if all your friends have tattoos, your circle may not be representative.

“Tattoos tend to be clustered, so people with tattoos often have social groups who also have tattoos,” says Wilson. “People with tattoos also tend to predict that a larger percentage of the U.S. population has tattoos. This may be another sign of short-sightedness, in that you don’t see that what’s normative in your group may not be normative elsewhere.”

Even though Wilson and Ruffle’s research shows differences exist between the tattooed and the non-tattooed, they say this doesn’t justify discrimination.

“We’re not trying to come down on whether tattoos are right or wrong or good or bad,” says Wilson. “On one hand, there’s some evidence that people who are tattooed have a more short-sighted tendency. On the other hand, the thing that they’re short-sighted about is essentially discrimination against them and we’re not endorsing discrimination.”

Also important to consider is that while tattoos may convey information about groups of people, that doesn’t mean the trait will apply to every member of the group. Further, a tattoo may not say anything about other facets of character, such as a person’s honesty, competence, agreeableness or conscientiousness.

If job candidates have visible tattoos, Wilson recommends assessing their personality in other ways and considering their record rather than making a snap judgment.

“If they do have a tattoo and that might be a concern for you, ask them about it,” says Ruffle.