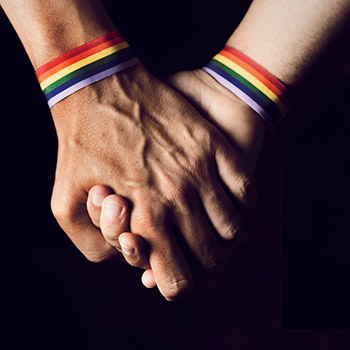 What does it mean to a gay man to hear “that’s so gay” uttered in a disparaging tone? For a trans woman to be called “he” or to be stared at? For a lesbian to be asked if she has a boyfriend? For the other person, it may be a slip of the tongue, a misunderstanding, an inadvertent behaviour. No harm intended.

For lesbian, gay, bisexual, trans, and queer (LGBTQ) people, however, the negative impacts of regular interactions like these can build up over time and undermine their well-being, says Associate Professor Michael Woodford of Wilfrid Laurier University’s Faculty of Social Work.

LGBTQ students experience more discrimination than straight, cisgender (identifying with their birth sex) students. They are also are more likely to face mental-health challenges including depression, anxiety and suicidality.

“Experiencing discrimination can contribute to mental health problems among LGBTQ people, but little is known about the often unintentional, subtle forms of everyday discrimination, such as the examples above, called microaggressions,” says Woodford. “These are not little things.”

Woodford and his colleagues recently published a few papers on LGBTQ well-being based on a large-scale study he co-led of LGBTQ students in the United States. He is currently leading a team planning a similar large study in Ontario, because Canadian research has so far been scant, he says.

“In our recent American study, we found that among cisgender LGBQ students, almost five per cent reported attempting suicide in the past year. Among trans students, it was nearly 10 per cent,” says Woodford. “These statistics are alarming when we consider that other studies looking at university students in general find attempted suicide rates ranging from 0.6 to 1.3 per cent.”

“Experiencing discrimination can contribute to mental health problems among LGBTQ people, but little is known about the often unintentional, subtle forms of everyday discrimination called microaggressions. These are not little things.”

Depression levels were also higher among the study’s participants. His research therefore focuses on trying to determine what’s underlying these disparities. So far his work is pointing at discrimination, including microaggressions.

“Microaggressions send an ongoing message of being othered, of not belonging. The stress related to dealing with microaggressions can add up and is part of the chronic stress that LGBTQ people face living in a heterosexist and cisgenderist society.”

Of course, LGBTQ students also face pressures common to all – exams, papers, breakups, roommates, figuring out what to do with their lives. The combination of stressors can affect students’ academic development, which is one of the priority areas being addressed in the upcoming Ontario study, says Woodford.

How to Thrive as an LGBTQ Student

Not all LGBTQ students are struggling; some thrive. They’re usually the students who have a lot of support, says Woodford. While strength can come from within, it doesn’t develop in isolation.

“In an earlier study, we found that LGBQ students who had higher levels of self-acceptance were more resilient to experiencing heterosexist microaggressions on campus,” says Woodford. “However, how you develop self-acceptance is through positive relationships and messages that affirm being LGBTQ.”

Making friends is vital. While LGBTQ students can have supportive friendships with cisgender straight people, it can be a lonely experience to be the only gay, bi, non-binary or trans person in a group. That’s where LGBTQ associations, such as Laurier’s Rainbow Centre (Waterloo) and Queer Sphere (Brantford), come in. Not only do these organizations provide social space, but talking to supportive peers about negative experiences can really help, says Woodford.

“A peer might say, ‘That really sucks’ or ‘I’m sorry that happened’ or even, ‘A similar thing happened to me and it shouldn’t happen. Let’s go talk to someone about it.’”

Trained professionals, such as counsellors and Student Affairs staff, can also provide support.

How to Be an Ally

Being an ally means, first, checking your own biases, says Woodford. It also means learning about LGBTQ issues and how to be a support person and advocate.

“If your friend says, ‘I might be gay,’ listen and let them lead the conversation. Don’t make assumptions or buy into stereotypes. If you’re not familiar with LGBTQ issues, it’s okay to say, ‘This is new to me but I’m here for you as you’re figuring things out.’”

If someone wants to talk about experiencing microaggressions, “don’t minimize the incident. Focus on what your friend is telling you, how it made them feel, and how you can support them,” says Woodford.

“If someone calls you out on a microaggression, don’t say, ‘Get over it’ or ‘I didn’t mean anything by it.’ Put yourself into their shoes and think about how they might have experienced that interaction even if you didn’t intend to convey a negative message.”

“We found that LGBQ students who had higher levels of self-acceptance were more resilient to experiencing heterosexist microaggressions on campus. However, how you develop self-acceptance is through positive relationships and messages that affirm being LGBTQ.”

Faculty members can also be allies. For example, they can use inclusive language in classes, set ground rules for positive class discussions, and confront microaggressions when they occur, says Woodford.

To learn more, Woodford recommends faculty, staff and students all attend allyship workshops when they are offered.

How Universities Can Help All Students Thrive

Universities can play an important role through policies and programs designed to meet the needs of LGBTQ students, says Woodford. He and his colleagues have been working to help shape the environment at Laurier so LGBTQ students are accepted and supported.

One important recent change is that the Department of Residence’s policies now house students based on their self-identified gender identity. Both the Waterloo and Brantford campuses offer the option of gender-inclusive housing, which means students may live with people of a variety of gender identities.

On a broader level, research suggests that including gender identity and sexual orientation as a part of anti-discrimination policy – as Laurier does – can result in students experiencing less discrimination, which can mean better mental health, says Woodford.

Woodford and his colleagues will begin their Ontario-wide study with an online survey starting in February 2019. They will also do follow-up interviews in fall 2019.

“We hope to gain a comprehensive understanding of the experiences and strengths of LGBTQ, two-spirit, and other sexually and gender diverse students, as well as how various campus-based initiatives affect students’ experiences, well-being, and academic development,” says Woodford. “This information will inform policy and program development to foster students’ inclusion, health, and success throughout the province.”