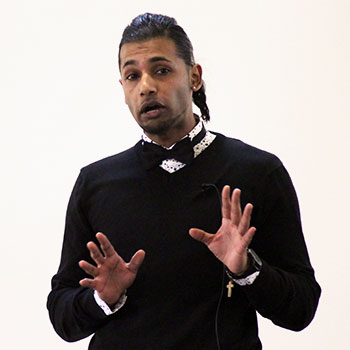 Each competitor was challenged to present their thesis, major research project or dissertation in three minutes or less to a crowd of fellow students, faculty members, staff, community members and alumni. They were allowed one slide, but no props and no notes.

A panel of judges, including Eileen Mercier, the university’s chancellor, and Joan Fisk, the chief executive officer of United Way Waterloo Region, had the difficult task of choosing the top three presentations.

Gehan Senthinathan, a psychology PhD student, won the competition with his presentation, “The Sweet Science of Addiction.” In the lab, he studies how restricting access to sugar affects how much rats consume. He argued that we should focus more on why people become addicted, rather than just on the substance itself, whether it’s an illicit drug or sugar. Senthinathan will go on to represent Laurier at the provincial competition at York University on April 19.

Magdalena Olszewski, a master’s student in integrative biology, was the runner-up with her presentation, “Cuscuta: the New Age Vampire.” Cuscuta is a parasitic plant she compared to vampires, since they suck life from the plants they attach themselves to. Victoria Parker, a master’s student in psychology, was the honourable mention with, “The Great Political Divide: Reality and Illusion?” In her research, Parker found that individuals tend to overestimate the prevalence of extreme attitudes in members of opposing political parties.

After the competition, participants were invited to vote for their favourite presentation. Emily Bednarz, an English and film PhD student, won the Participants’ Choice award for her presentation, “Free from Violence: Canadian Women Poets Making Contact in the City.” Women have used poetry to chart their own history of cities, she argued.

The presentations will be available to watch on YouTube in a few weeks.