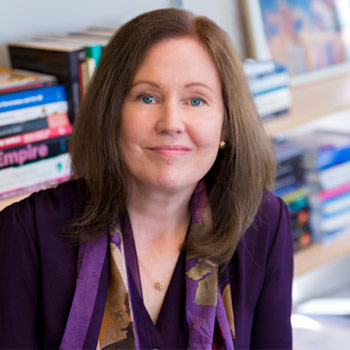 There’s a lot of discussion about international trade these days, with hot debate over everything from softwood lumber to cheese. But one aspect of trade has only recently come into the spotlight: how it affects Indigenous peoples. Wilfrid Laurier University Associate Professor Patricia Goff is trying to keep it there.

Goff, who is chair of the Department of Political Science, is heading a project to synthesize and make sense of the research others have done on Indigenous peoples and trade. The results will be presented to representatives of Global Affairs Canada, meaning Goff’s work could end up making a difference on the world stage.

The Canadian government has said it wants to approach North American Free Trade Agreement (NAFTA) renegotiation talks with a “progressive trade agenda,” which Goff defines as the idea that, at a minimum, “trade agreements have to be inclusive and fair.”

Trade agreements can influence many aspects of our daily lives through provisions that affect everything from the labour laws we work under to the specs of the cars we buy. Some provisions are good for some groups and bad for others but more often it’s hard to say whether the net effect is positive or negative.

Regarding NAFTA specifically, “It’s not clear that NAFTA harmed Indigenous peoples directly; nor is it clear that it helped them. But the potential for impact is there so they should be part of the conversation,” says Goff.

Goff’s research, for which she received a Social Sciences and Humanities Research Council of Canada (SSHRC) Knowledge Synthesis Grant, isn’t limited to NAFTA. She and her two research assistants, both Political Science alumni, are looking into Canada’s other trade relationships too, such as the Canada-European Union Comprehensive Economic and Trade Agreement (CETA), signed in 2016, and a possible free trade agreement with China, which the two countries are currently exploring.

One area of concern across the board has to do with investor-state dispute settlement provisions. These provisions allow investors, including multinational companies, to sue governments if they make decisions – such as on environmental protection – that threaten the companies’ profitability in specific ways. As such, there is potential for governments’ policy goals and also for Indigenous rights to be undermined.

Another area of concern has to do with intellectual property rights. Trade agreements typically grant protections to intellectual property where an invention can be patented, an author named, and a date identified. This doesn’t work well with knowledge that has been passed down through generations and/or that a community may want to protect rather than share with the wider world.

“Indigenous peoples have a huge body of traditional knowledge,” says Goff. “In some instances, it can be adequately protected by intellectual property provisions but in a lot of instances it cannot.”

Some areas of concern vary for different Indigenous peoples. For instance, softwood lumber is a major concern for B.C. First Nations. The effects of climate change on the Arctic are a key concern for the Inuit.

A Duty to Consult

There are, however, some points that Canadian Indigenous people broadly agree on, says Goff. A major one is the duty of the Canadian government to consult with and include Indigenous peoples in trade negotiations.

The Liberal government has already made some strides in that area. Assembly of First Nations (AFN) National Chief Perry Bellegarde is one of 13 members of a NAFTA advisory council announced in early August.

Having Bellegarde on the council is “great – but it may not be sufficient,” says Goff, noting that the AFN does not necessarily speak for the Métis or Inuit. These groups have also been asking to have a seat at the table, as the provinces did for the first time during CETA negotiations.

This research project is a short one – Goff and her research assistants just started working on it in the spring and they must present their report in Ottawa in November. However, Goff is coming at it with a wealth of related research on subnational actors in trade and on how trade policy intersects with other policy areas. In the future, she plans to extend her research on Indigenous trade issues further – work she hopes to do in collaboration with Indigenous researchers.

As for the report she is now working on, “certainly my hope would be that it can inform government policy,” she says. “That’s the expectation.”